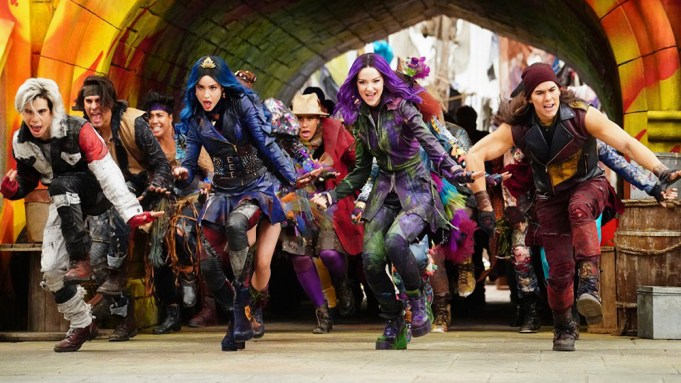 Disney Channel has set 8 p.m. Friday, August 2, for the premiere. The original cast returns as does director Kenny Ortega, who also helmed the High School Musical movies in the 2000s.

Sara Parriott and Josann McGibbon, who penned the first two Descendants pics, are back for Round 3.

Descendants 3 unfolds on “VK Day” as fair-minded Villain Kids Mal, Evie, Carlos and Jay cross the barrier and return to their birthplace, the Isle of the Lost, to bring four deserving VKs to the coveted Auradon Prep in a land where they have a chance at success, happiness and fulfillment.

But it’s Mal who knows she must resolve to permanently close the barrier to the Isle of the Lost, fearing that nemeses Uma and Hades will wreak vengeance on her new home, the idyllic kingdom now ruled by her beloved King Ben. Despite her decision, an unfathomable dark force still threatens the people of Auradon, and Mal and her friends face their biggest challenge yet.