Continue to Deadline SKIP AD
You will be redirected back to your article in seconds
Skip to main content
October 1, 2021 3:44pm 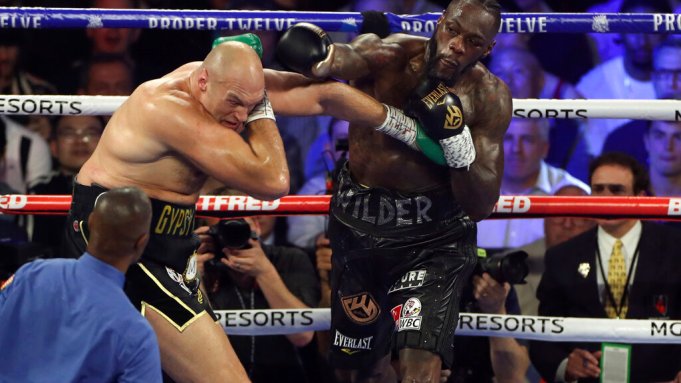 EXCLUSIVE: “I’ve got the highest ratio of knockouts in boxing history,” declares ex-WBC heavyweight champion Deontay Wilder. “When people come to see heavyweights they come to see knockouts,” the Alabama-born former Olympian adds in an exclusive video before his rematch with Tyson Fury on October 9.

Indeed “Bronze Bomber” nicknamed Wilder can, despite coming up short against Fury in their last battle in February 2020 At 75%, the third highest knockout to win percentage in boxing history. The 2015-2020 chap is surpassed by only Joe Louis and Rocky Marciano in world heavyweight fight titles.

Whether Wilder increases that percentage in the Fox Sports and ESPN co-produced Fury vs. Wilder III fight in the T-Mobile Arena on the Las Vegas Strip next week remains to be seen — but odds look good for the man with that devastating right hand if the bookies are any indication

Still, with the British-born self-proclaimed “Gypsy King” defending his title for the first time, there is no argument that between them Wilder and Fury have reinvigorated top tier boxing and seen long fractured belts united for the first time in decades.

Besides the action in the ring, the proof is in the numbers.

Resulting in a draw, the first December 2018 fight between then champ Wilder and Fury, with its dramatic 12th round rise from the mat by the latter, pulled in around 350,000 pay-per-view buys for Showtime and grossed north of $30 million. Literally punctuated by a 7th round technical knockout of Wilder, with his trainer calling an end after watching his fighter suffer pummeling by Fury, the early 2020 first rematch surged to over 850,000 pay-per-view buys over various cable and satellite providers via a massive joint production by Fox Sports and ESPN.

The often-competing outlets teamed up in 2020 because Fury and Wilder have different separate exclusive contracts with each one respectively.

On the ground, that fight last year at the MGM Grand actually set a nee record for the live gate for a heavyweight championship fight in Sin City. In the end, the take was $16.91 million. That tops the pervious record set by the rematch between Lennox Lewis and Evander Holyfield at the Thomas and Mack Arena in Las Vegas

At $79.99 the October 9 fight this year is once again being broadcast live on ESPN PPV and Fox Sports PPV. Expected to be a blockbuster, the potential final fight in this trilogy sees a 60-40 purse split with Fury looking at around $30 million and Wilder taking home at least $20 million.

All of which will make itself clear on the 9th in the Top Rank, BombZquad Promotions, TGB Promotions and Frank Warren’s Queensberry Promotions presented big fight.

Again, check out the 512 Media produced Wilder video above.