Continue to Deadline SKIP AD
You will be redirected back to your article in seconds
Skip to main content
November 4, 2019 9:00am 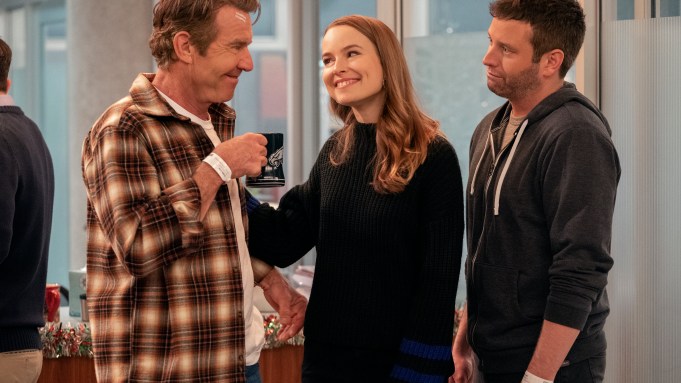 Don’t let the title fool you. Netflix’s Merry Happy Whatever is no Lifetime-like, one-shot-only Christmas movie, though the trailer, seen above, makes clear that this holiday season is the setting for the family comedy starring Dennis Quaid.

The set-up is established quickly: Quaid plays Don Quinn, patriarch devoted to his Philly family but not so embracing of outsiders. When daughter youngest daughter Emmy (Bridgit Mendler) arrives home from L.A. with new boyfriend and struggling musician Matt (Brent Morin), dad’s family motto “there’s the Quinn way… and the wrong way” comes out in full force (shades of Meet the Parents).

Or as dad also says, Christmas is his favorite holiday because he gets to “spend it with my loved ones – and Matt.”

The series launches Thursday, November 28, and is set before and just after Christmas, though future episodes apparently will take full advantage of that Whatever in the title to encompass other special events and days in the family’s life.