Continue to Deadline SKIP AD
You will be redirected back to your article in seconds
Skip to main content
June 25, 2020 4:32pm 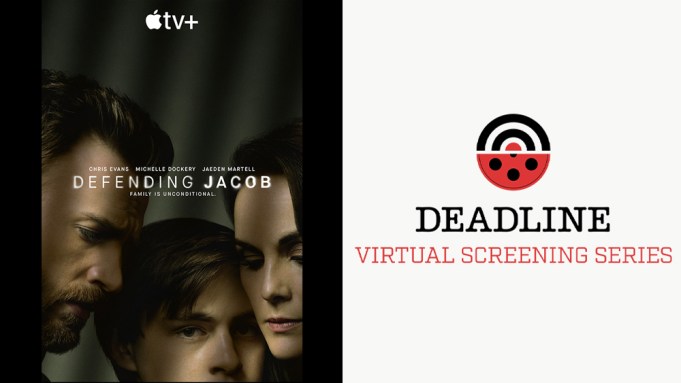 “I would never do it unless it was a story worth telling, but from the perspective of at least the people that I’ve worked with, you know, in a heartbeat,” Defending Jacob star Chris Evans said when I asked a newsy question about the possibility of doing a second season of Apple TV+’s gripping Emmy-buzzed eight-part limited series.

The show, based on the book by William Landay, was originally designed to be a theatrical motion picture, but once showrunner-writer Mark Bomback and director Morton Tyldum got into it, the story seemed to fit better in an expanded TV format — though, at least as far as I can tell, it was never designed to be a continuing series. However, when I sat down this week following a Deadline Virtual Screening Series presentation of the Season 1 finale for a conversation with Evans, who plays Boston DA Andy Barber, and his co-star Michelle Dockery, who plays his wife Laurie — both parents of a teenage son accused of murdering a classmate — another visit to the world of Defending Jacob was not completely ruled out. (Although Dockery did laugh and say it might have to be called Defending Laurie. For those who haven’t seen the series I won’t go into detail about what that means, but a follow-up would be intriguing, especially with Evans joking a second season should instead be called Defending Jacob: Laurie’s Revenge.)

“I mean look, I’ll say this. Sometimes what matters more to me than the script, than the role, is the people, you know?” said Evans. “The process of acting is such a tricky one and it can be really exacerbated by the wrong environment, and when you find a sweet spot, when you have a playground that you can’t wait to get to because everyone makes it such a safe environment to take risks, it’s understandable to miss it and maybe want to revisit.” Dockery, who originally did Downton Abbey first as a one-off miniseries but then stayed on for another five seasons and a feature film, agreed.

“We thought we were closing the door but I don’t know, I feel like there’s always an opportunity to revisit something and especially if the audience out there, there’s an appetite for it, so who knows?” she said. “But as Chris was saying, this was such a pleasure, so we had such a wonderful time and yeah, I would jump in a heartbeat to do it all again.”

That sounds promising for one of Apple’s first major efforts, a watercooler hit that was presented in an old-fashioned way of mostly weekly installments, rather than a binge format. Evans likes the whole new streaming world, and these kinds of series that can let characters breathe and moments live, where you can explore the contours of the circumstance as he says. But he compares the way it is consumed to the way you can consume literature. “You read in chapters and then you put the book down and then depending upon how much the book stays with you in between those sittings is real indicative of whether or not it’s a good book, and how quickly you can get sucked back into the story when you revisit,” he said. “So I liked the fact that it forced people to kind of be removed a little bit from week to week and process and dissect and just you know, chew on it a little bit before you had to revisit.”

And revisit the audience did for this nail-biter of a courtroom and family drama that goes in unpredictable directions, and where the audience is always kept off balance not knowing whether Jacob (played by Jaeden Martell) did it or didn’t do it. Certainly all of the actors made this family unit entirely believable, so you stick with it as it all starts to come apart. Dockery said it helped to spend a lot of time together on the set, so the earlier scenes in the show, shot later, would make sense.

“I think being together the amount of time that we were, over six months, and in that house which was the set, the peaceful set that was built for us which felt like a real house. You know, there were times when we were like, ‘God, I wish I had this kitchen.’ We bonded really, you know, as friends and as this family, so by the time we did those kind of earlier scenes towards the end we’d already created this rapport with one another which I felt really comes across on screen,” she said.

The two stars were a mutual admiration society. “Chris was a very, very good inspiration for me in that he is very quiet in the makeup trailer and he has this very good way of kind of reserving his energy, and I really took something from that because I’m quite chatty on set and with this character I really had to sort of be in the zone,” Dockery said.

Evans returned the compliment, noting the ever-changing intensity of his co-star’s role. “I do have to speak to that. I’ll kind of pull the curtain back behind her, the act in process a little bit, but it’s one thing to do a scene that’s emotional where you begin the scene emotional, it’s another thing where within the scene the character has to build. That’s tough,” he said. “Michelle has so many scenes in this where she starts in one place and through the scene has to deteriorate and that is an unbelievable challenge and she absolutely knocked it out of the park.”

Check out the video above to watch part of our conversation for Deadline’s Virtual Screening Series.