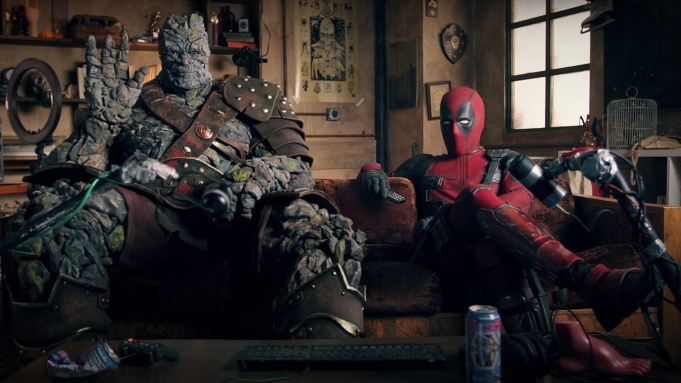 In a bit of meta movie commentary, a new video has Ryan Reynolds’ character Deadpool joined by Taika Waititi’s character and talking pile of rocks, Korg, to watch the trailer for Ryan Reynolds and Taika Waititi’s new 20th Century Studios movie, Free Guy. The clip could be considered the first official MCU collaboration for Deadpool. It’s certainly a superpowered bit of Disney synergy.

The video was posted by Ryan Reynolds to Instagram with the caption, “DP is officially in the MCU! He’s starting with reaction videos, then some social influencer work, onto Parks appearances all leading up to some after-credit work by 2030.”

On Twitter, Reynolds’ post with the video revealed that, “If you include Deadpool’s cocaine rider, this is the most expensive reaction video ever made.”

Just last month Reynolds uploaded a photo to Instagram that showed Deadpool’s mask poking out of a backpack. Now we know why. But back to the trailer reaction.

While Deadpool finds Reynolds’ face in the footage “quite punchable,” Korg thinks Waititi “seems quite nice.” Both agree that the presence of co-star Jodie Comer in the trailer is a plus with Deadpool exclaiming, “God, I love her!”

There’s surprisingly little mention of the giant pink bunny who pops up near the end of the footage. Deadpool seems more focused on the fact that he doesn’t have his own Disney+ show, which he mentions three times. But, in the end, he gives the trailer 4 out of 5 avocados. Korg seems confused by the rating, explaining that he was “raised by avocados.”

Click on the image above to watch the video.