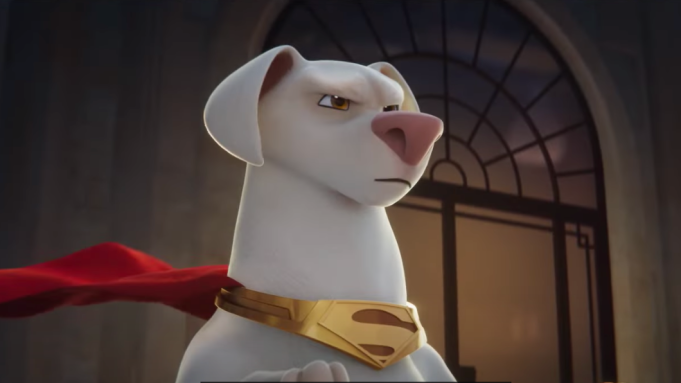 The first official trailer for Warner Bros. Animation’s upcoming DC League of Super-Pets starring and produced by Dwayne Johnson finds one (Super)man’s best friend his only hope. After Superman (John Krasinski) is sidelined by Lex Luthor, the Man of Steel’s faithful companion, Krypto, sets out to save the day.

While Superman has Batman, Wonder Woman and the rest of the Justice League at his side, Krypto has only “a bunch of shelter pets” who, luckily, have been imbued with superpowers.

Johnson, of course, plays Krypto, while his ragtag band is made up of Ace (Kevin Hart), a hound who has super strength; PB (Vanessa Bayer), a pig named who can grow to a massive-size instantly; Merton (Natasha Lyonne) a turtle with super speed; and Chip (Diego Luna), a squirrel who can shoot electricity from his tiny fingertips.

“My best friend is in trouble and you have to help me,” says Krypto, rallying the troops. What follows is an adventure full of challenges, surprises and potty humor.

The reunion with Hart reps the comedian’s fourth movie with Johnson. The duo also starred in both Jumanji films and Central Intelligence together — Hart also had an uncredited part in Johnson’s Fast & Furious spinoff, Hobbs & Shaw.

The project reps Johnson’s second with DC after the New Line/DC movie Black Adam, in which he plays the title character, with his Seven Bucks producing. DC League Of Super-Pets marks the star’s third theatrically-released animated film, after Planet 51 and Moana.