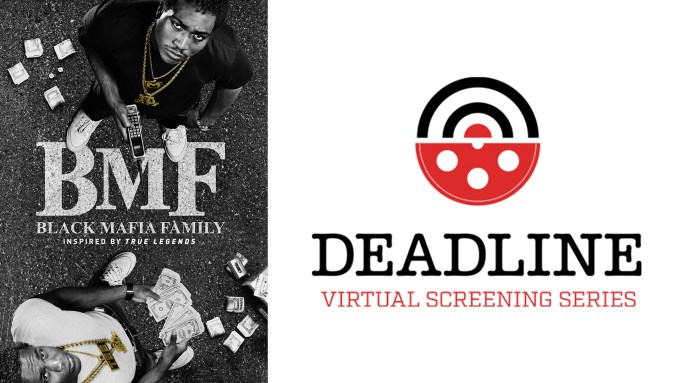 “These brothers ran one of the largest domestic drug distributions in the history of America, these two Black men,” states BMF star Da’Vinchi of the real-life Demetrius “Big Meech” Flenory and Terry “Southwest T” Flenory, who are the basis of the Starz series.

“I love the character, the character Terry, I feel like I have a lot of similar ways like him …his balancing two different worlds, that was my whole life,” the Grown-ish alum added of the infamous Detroit native who was released from prison in 2020 to finish out his 30-year sentence in home confinement.

Calling his attraction to the Curtis “50 Cent” Jackson executive produced and Randy Huggins created series a “no-brainer,” Da’Vinci was speaking this week on the BMF panel for Deadline’s Virtual Screening Series. As you can see in the video above, he was joined by showrunner Huggins, plus cast mates Russell Hornsby (Charles Flenory), Michole Briana White (Lucille Flenory) and Steve Harris (Detective Bryant)

Renewed for a second season, the Snoop Dogg featuring BMF debuted strong on September 26, 2021 to tune mainstream America into the saga and legacy of the Flenory brothers. With Demetrius Flenory Jr. playing his own father in the show, the gritty and late 1980s-set BMF also featured a much-hyped cameo by Detroit native and 8 Mile vet Eminem.

Certainly one thing that grounded the eight-episode first season was how real the series seemed, literally and figuratively.

“One of the things I love is I’ve never had the opportunity to actually play a real person that I can call up and talk too,” Goliath alum White noted of her role portraying the brothers’ mother Lucille. “I think her voice is so important to be heard, because you rarely hear the voice of the mother in stories like this,” the actor added.

It is a sentiment that Grimm vet Hornsby agreed with.

“Any time you can tell retell a story that actually happened, I feel like it’s a blessing, and also I like the idea of playing real people as it pertains to people who are salt of the earth,’ the actor who plays the father of Big Meech and Southwest stated. “You know, there is a saying that goes, there was a time when boats were made of wood and men were made of steel.”

In terms of steel, EP Huggins was playing his cards close to his chest of what to expect for Season 2.

Of course, BMF isn’t going to stop there, even less so with an eight-episode docu series, produced by 50 Cent’s G-Unit Film and Television and Alex Gibney’s Jigsaw Productions, now in the offering too.