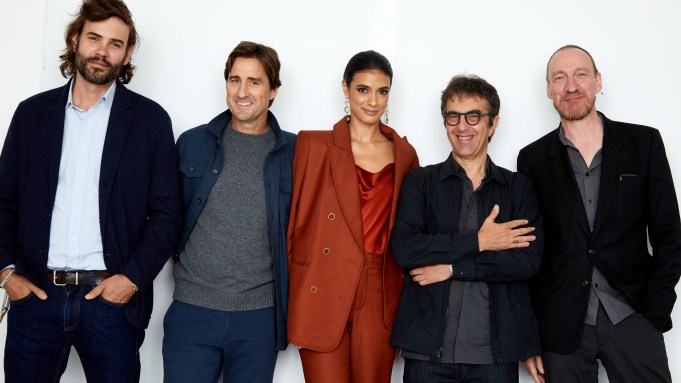 Director Atom Egoyan found inspiration from a very different field of work when he was writing Guest of Honour. David Thewlis’ character Jim is a health inspector in this story of a father and daughter trying to connect after the latter is imprisoned.

“I opened a bar here in Toronto about 15 years ago called Camera Bar,” Egoyan said at Deadline’s TIFF studio, “which is a cinema bar. We were serving food, and we had to deal with food inspectors. A health inspector came in, and I was just struck by the nature of the job. It wasn’t anything in particular that he did. We were a very clean restaurant where there [weren’t] any issues, but I began to research it, and I realized how much power they had. They’re dealing with health codes, and what society needs to protect itself, and I thought of this character who had a family issue that was beginning to torment him, and how he began to take it out on the restaurants that he was inspecting.”

For Thewlis, playing a health inspector proved tricky to research.

“There was a funny thing where we weren’t allowed to research it, because I wasn’t allowed to go with real food inspectors on their rounds,” he said. But I did a lot of research, as much as I could, outside of that. But it was more for me to try and find the emotional heart of the man.”

Jim’s overwhelming issue is that his daughter Veronica (Laysla De Oliveira) has been wrongly jailed for sexual assault, and he cannot understand why she wants to remain in prison. The truth—that she feels she needs punishment for an earlier mistake—slowly emerges through flashbacks and her conversations with Father Greg (Luke Wilson) who will eulogize Jim at his funeral.

“The part of the priest, there is a little element of he’s the narrator, too,” Wilson said. “He kind of runs through the movie, and he knows things about her father that she doesn’t, and he’s kind of trying to draw things out of her. The part I was in almost felt like kind of a one-act play, taking place on one stage, which is the kind of thing I’ve not done either. So, I actually found it very interesting.”

De Oliveira had only a short time to find the onscreen father-daughter relationship with Thewlis. “David and I only had a couple of days together,” she said. “So I think a lot of the work was done prior, with Atom. We rehearsed quite a bit, we met several weekends, and then when I actually got the part, we rehearsed, or we improvised scenes that weren’t in the script. He asked me a lot of questions, and I responded as Veronica. There was a lot of background work that we did, so when we shot, we were ready to go. And then, I had one day with David. But he’s so amazing, and so open, so it wasn’t hard to develop that relationship.”