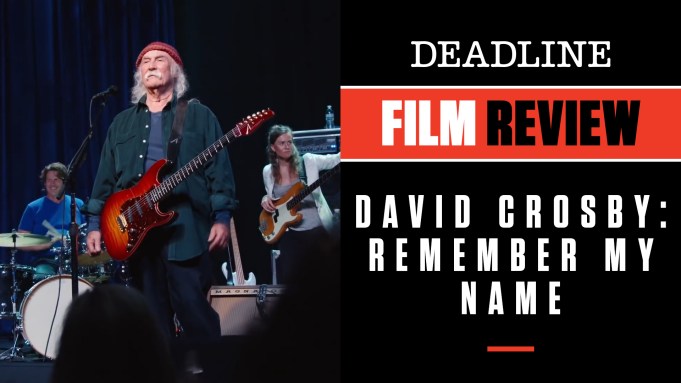 It is a banner time for movies about musicians, both narrative such as Bohemian Rhapsody and Rocketman and documentaries like the latest about two-time Rock and Roll Hall of Famer David Crosby. But David Crosby: Remember My Name isn’t content just to be your standard music docu. This is a searing, raw, no-holds-barred portrait of a man who made his mark in music at a high human cost but always on his own terms. A key member of three iconic bands — The Byrds, Crosby Stills Nash & Young, and Crosby Stills and Nash — this remarkable look is anchored by brutally honest interviews conducted by Cameron Crowe, the Oscar-winning writer-director whose Almost Famous has a fictional connection with Crosby and who first interviewed Crosby as a 16-year-old budding journalist for Rolling Stone.

Crosby clearly trusts Crowe and lets him into his life in constantly fascinating fashion. Conceived by director AJ Eaton, this docu explores a childhood and relationship with a father who never once expressed his love; his arrogant and often at-odds encounters with bandmates; and his polarizing lifestyle that led him to heroin and cocaine, eventually prison time, as well as a slew of health problems including a liver transplant, eight heart stents, diabetes and hepatitis C, among others. A constant theme is that Crosby is living on borrowed time, miraculouslyhaving  escaped the death sentence that plagued other rockers of his generation including the Doors’ Jim Morrison, whom Crosby confesses he hated.

On the bright side, however, he kicked the drug habit and has been happily married for years to a wife who stands by his side at every turn — and appears on camera reluctantly to show why. Scenes shot at their Santa Ynez ranch are quite moving, as is the fact that Crosby is having a musical renaissance on his own with four albums in five years despite being persona non grata with his former group.

What makes this all really work as well as it does it that Eaton chooses not to include a lot of the talking heads that are typical of so many docus like this. Instead he mostly lets Crosby do the storytelling as he takes him on a bittersweet tour of his life. Crowe is off camera and, with the exception of one scene, not even mentioned as the interviewer. This is all Crosby, his way — warts and all. That includes a painful reunion of CSN a few years ago singing “Silent Night” during a Christmas special attended by President Obama and Michelle Obama. The legendary rockers are hopelessly off-key and at that point not even on speaking terms. One of the hopes for Crosby is that perhaps this film will be a bridge to a legitimate reunion, but don’t hold your breath.

What this film, which had a smash debut at Sundance in January, stands for is to be a searing and lasting document of a man who is unapologetic for the fact that without music he is dead, no matter the bittersweet toll along the way. The use of that music is extraordinary and so is this movie. Crowe, Michele Farinola and Greg Mariotti are producers. Sony Pictures Classics releases it Friday.

Check out my video review above, which includes footage from the film. Do you plan to see David Crosby: Remember My Name? Let us know what you think.