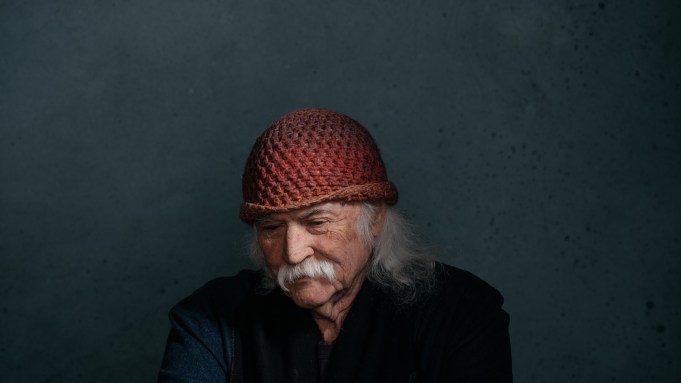 When music legend David Crosby was asked to participate in a documentary on his life, he had a concrete vision of what it should be, should it happen—a raw, unfiltered look at the highs and lows of his life and work, putting him in a place where he had “nowhere to hide.” The first feature from A.J. Eaton, produced by seminal filmmaker Cameron Crowe, David Crosby: Remember My Name is just that.

“People make documentaries—not all the time, but largely—by inviting every famous person they ever met to step in front of a camera and say how cool they are, and then you can use all their names in the advertising. It’s a really old way to do it; we didn’t want to do that,” Crosby told Deadline recently, appearing in studio with Eaton and Crowe. “If we were going to do it at all, we wanted to give you a viewpoint into a guy that revealed him to you. If that’s what you wanted to see, a documentary about a guy, then you’re curious about him, and you don’t want to see a laundered version.”

A founding member of both The Byrds and Crosby, Stills & Nash who was inducted into the Rock and Roll Hall of Fame twice—honoring his work in each of these iconic ensembles—Crosby collaborated or interacted in his heyday with the likes of Bob Dylan and The Beatles, as documented in the pic. He’s precisely the kind of individual that is likely to be mythologized, and yet Crosby continuously resists that effort, opening up in the documentary to expose the challenges of his life, as well as his biggest regrets. “I know I’m flawed, and I know I’ve made tons of mistakes. [But] I try really hard to be a decent human being now, and I try really hard to make good art,” the musician said. “That’s all I’m credited for.”

For Eaton and Crowe, the process of making Remember My Name, and interviewing Crosby, was extraordinary, though their experiences were different, simply due to their respective ages, and the relationship they had (or had not) cultivated with Crosby and his music. For Eaton, the process began when he was invited to a recording session for Croz, Crosby’s first solo album in decades. “I walked in with no expectations at all. To be honest, I wasn’t a big fan of Crosby, Stills & Nash; they predated me. I grew up in the ‘80s and ‘90s, and the only thing I knew about David Crosby was that he played Tickles the pirate in Hook, one of my favorite movies growing up,” the director admitted. He was also aware of unflattering headlines, with regard to the singer-songwriter’s brushes with the law over more than two decades. “But I walked in and I was like, ‘Wow. This is great,’” Eaton recalled, “’a guy in his nucleus, writing an album with a bunch of young musicians.’”

Famously, Crowe started out in his career as a young and passionate journalist at Rolling Stone, translating his personal experience for the screen with Almost Famous. So naturally, he needed no background on Crosby going into the project, nor a reason to take it on. “David was the interview that I wanted to do as a young journalist, and when I finally was able to do it—because he didn’t do interviews for a while—it was remarkable. I didn’t need to convince him to be honest; he’s just honest,” Crowe reflected. “He answers your questions beautifully, and that has not changed over time.”

Before the documentary feature was locked in, Eaton initially pitched Crosby on a short film documenting his experience with his latest album, though the film would become so much more, with Crowe’s involvement. By Crosby’s account, both were “merciless” in their interrogations, particularly Crowe. “He asked me the single hardest question I’ve ever been asked in any interview, ever in my life, and I had to be honest and give him an answer, and it hurt,” he said, as the feeling in the room shifted. “The cathartic effect is good; you lighten your load by doing this. It gives you a chance to consider what you’ve done, and more importantly, to learn from it.”

While his time with Eaton and Crowe could be painful, Crosby doesn’t hold a grudge. At the end of the day, he says, “they’re both friends of mine.”

For more from our conversation with David Crosby and the artists behind the doc, take a look above.