Continue to Deadline SKIP AD
You will be redirected back to your article in seconds
Skip to main content
August 24, 2020 10:45am
1Comments 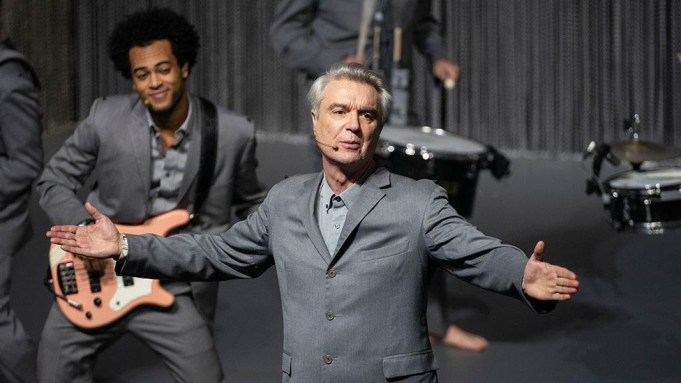 The Broadway future of the acclaimed David Byrne’s American Utopia is unclear, but the date with HBO is certain: Spike Lee’s film adaptation of the theatrical concert is set for Oct. 17, and HBO released a first-look teaser today.

Set to the beat of Byrne’s cover of Janelle Monáe’s fierce “Hell You Talmbout,” which the former Talking Heads frontman performed regularly – with Monáe’s blessing – as part of the American Utopia show, the new teaser offers a good look at the production’s unique and powerful staging.

American Utopia includes old and new Byrne songs, including his greatest Talking Heads and solo hits: “Burning Down the House,” “Life During Wartime,” “This Must Be the Place,” “Road to Nowhere” and “Everybody’s Coming To My House,” as well as selections from his 2018 album that gives the show its title.

Leading a troupe of 11 musicians and singers, Byrne intersperses brief monologues on topics ranging from the personal to the sociopolitical, including \police brutality, voter turnout, climate change and immigration.  And there’s lots of dancing – choreographer Annie-B Parson taps into Bryne’s career-long devotion to idiosyncratic movement and quirky gestures to create a truly fresh ensemble performance.

David Byrne’s American Utopia played to sold-out audiences at Broadway’s Hudson Theatre from last October to last February, and was slated to stage a return engagement this fall before the COVID-19 pandemic closed Broadway. Updated Broadway plans have not been announced.

David Byrne’s American Utopia premieres on HBO and streams on HBO Max October 17 at 8 p.m. (The concert film will air on CRAVE in Canada.)