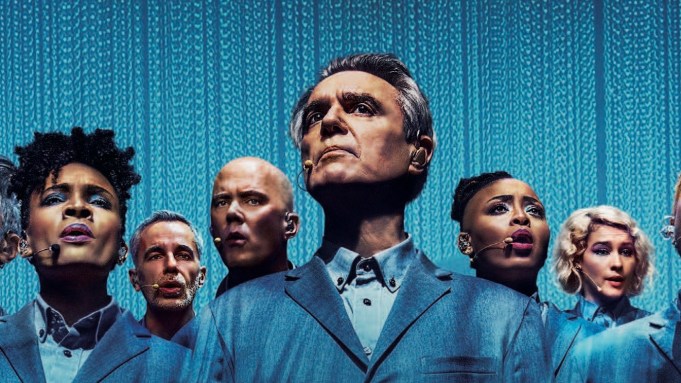 “What if we could eliminate everything from the stage, except the stuff we care about the most,” says Byrne on the empty (but gorgeously lit) stage. “Without cables and wires, what would be left? Well, it would be us, and you.”

The trailer includes snippets of classic Byrne songs “Burning Down the House” and “Everybody’s Coming to My House,” and gives a good look at the performance choreographed to take full advantage of Byrne’s signature idiosyncratic dances and movement.

“It is my honor and privilege that my art brother, Mr. David Byrne, asked me to join him in concert, to invite me into his magnificent world of American Utopia,” said Spike Lee, with Byrne adding, “Spike and I have crossed paths many times over the years, obviously I’m a huge fan, and now finally here was an opportunity for us to work together. I am absolutely thrilled with the result.”

Coinciding with the debut of the HBO special, Bloomsbury will release the book American Utopia, with words and lyrics by Byrne and art by best-selling author, illustrator and artist Maria Kalman.

Check out the new trailer above, and see the newly released poster below.