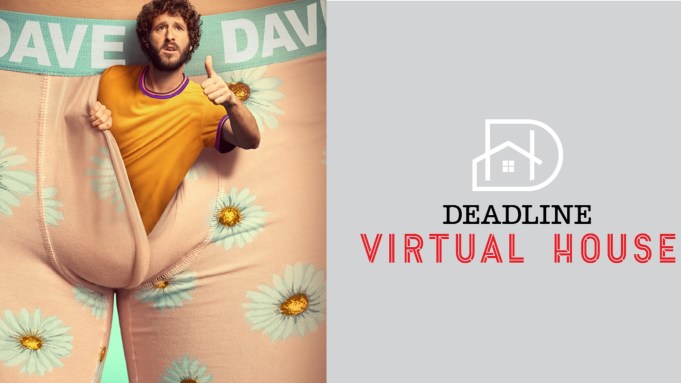 The creators and cast behind the show, including Burd, co-creator, exec producer and writer Jeff Schaffer, Saladin Patterson, exec producer and writer and cast members Taylor Misiak and GaTa, stopped by the Deadline Virtual House screening room, which I hosted in association with Rolling Stone’s Chief TV Critic Alan Sepinwall, to discuss the show.

Following a screening of episode nine, Ally’s Toast, which revolves around an emotional wedding scene between Dave and Misiak’s Ally, the group discussed the origins of the show, the episode as well as some of the broader context around the series.

Based on the life of rapper and comedian Dave Burd, the show is centered on a neurotic man in his late twenties who has convinced himself that he’s destined to be one of the best rappers of all time. Now he must convince his closest friends, because with their help, he actually might convince the world.

“My desire was to make a TV show that felt hyper real, really funny and have a lot of emotional depth to it. I wanted to make it be aesthetically pleasing and well shot and every detail precisely executed, down to the music,” Burd said.

“I didn’t want to just make a good show, I wanted to make a great show that really rocked the culture. I’m also aware that I have no idea what I’m doing. As much as I believe I was capable of that, I also knew that is was based on naive thinking so I had to partner with somebody who knew what they were doing. I met Jeff, for me, I really need to be able to trust the people. I don’t believe them, it’s meaningless. It’s easier to trust them if they are responsible for my favorite shows of all time. His resume alone… that was pretty instrumental,” he added.

Schaffer, who runs Curb Your Enthusiasm, said that he was not particularly looking to do another TV show on top of the Larry David HBO comedy but he met Burd and he reminded him of the Seinfeld co-creator. “I knew who Dave Burd was, Lil Dicky, the internet is 60% porn, 20% Lil Dicky videos and 20% clickbait. I didn’t know if I’d like him until he started telling stories and the way he told stories was like Curb stories. We kept talking and we would meet in my Curb offices, so Larry David would pop his head in. Dave said ‘people would call me LD’, but I said, ‘no you’re not LD, there’s only one LD.’ But as we talked, we realised there was such an interesting show here.”

The episode in question features a rather graphic moment of Burd going to the bathroom in a pond. He explains that he spent quite a bit of time on the details in what is thought to have been a TV first. “I’ve never seen anyone actually shit on camera. It’s funny but I’m being serious, it’s groundbreaking, seeing someone actually poop. On the day, we had a machine that took so long to attach to my body, as soon as we started filming, there was someone pushing a lever, and the first time we did it the pipe malfunctioned and there was diarrhoea shooting into the air,” he said.

Schaffer added, “The problem was we realised, it’s not that it doesn’t look real, it doesn’t look like Dave’s. Once we understood that, we were able to massage it and get it into a place where we were happy.”

The show has subsequently been picked up for a second season, which will air in 2021.

Dave is co-created by Dave Burd and Jeff Schaffer and executive produced by the pair along with Saladin Patterson, Kevin Hart and Hartbeat Productions, Scooter Braun and SB Projects, Greg Mottola, Marty Bowen, James Shin, Scott Manson for SB Projects and Mike Hertz. The series is produced by FX Productions.