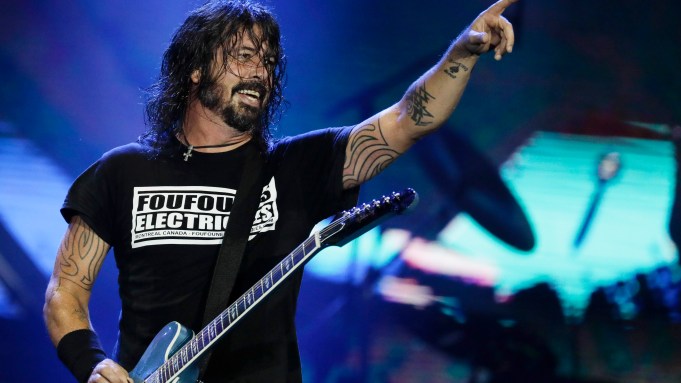 Produced by Foo Fighters’ Grohl, the good-looking feature is a love letter to a rock and roll rite of passage: touring in the back of a van. Grohl has pulled in an impressive lineup of talking heads including Ringo Starr, AC/DC’s Brian Johnson, Aerosmith’s Steven Tyler, St. Vincent, Slash and Duff McKagan from Guns & Roses, U2’s The Edge, Red Hot Chili Peppers’ Flea, Metallica’s Lars Ulrich, Exene Cervenka of X, and more.

The project marks the flashiest acquisition for the new Sony-backed channel Coda Collection, which has acquired global rights and will release the film on Friday, April 30, exclusively on the music-oriented subscription platform which is available via Amazon Prime Video. The film will also be available outside of the U.S. via Amazon’s streaming service.

“This film is my love letter to every musician that has ever jumped in an old van with their friends and left it all behind for the simple reward of playing music,” explained former Nirvana drummer Grohl. “What started as a project to pull back the curtain on the DIY logistics of stuffing all of your friends and equipment into a small space for months on end eventually turned into an exploration of ‘why?’ What drives us?’”

The movie follows young bands RadKey and Starcrawler who are taking on the world one town at a time, while also telling stories of the biggest artists in the music industry, recalling the romance and adventure, as well as the insanity and chaos, of their own time on the road. The film explores what it takes to turn a van into a home, and how the tricks of this trade have been handed down through the decades. There was a time before the digital age when players had to take the music to the people one show, one overnight drive, one dilapidated little club at a time.

The production describes the film to us as a “homage to the moment in every musician’s life when their commitment is tested and their desire to play music for others becomes an almost irrational act of blind faith. The first step to prove to yourself and the world that you belong is to load up your instruments, your talent and your courage, and get in the van to take your music to the world — a true rock and roll rite of passage. The documentary is also a tribute to every young kid who dreams of a life playing music. Dave was that kid. As were Ringo Starr, The Edge, Annie Clark, Steven Tyler, Ian Mackaye and everyone in between. The list goes on forever. While they all have stories — outrageous, unbelievable, insane, as well as poignant stories — they all share a common bond. At some point, before anyone knew their name, they had an unstoppable drive to share their music with the world. Their passion led them to leave everything behind, throw caution to the wind, and chase their dream.”

A Roswell Films / Therapy Studios production, the feature was directed by Grohl, produced by John Ramsay, James A Rota, Mark Monroe, and Foo Fighters, and edited by Dean Gonzalez. Jessica Young was the director of photography and Brandon Kim was the sound designer and mixer.

Grohl made his debut as a director/producer with 2013 Sundance documentary Sound City about the Van Nuys CA studio where Nirvana recorded Nevermind in 1991. He also directed the eight-part HBO docuseries Foo Fighters: Sonic Highways, which premiered in 2014 and went on to win two of the four Emmys for which it was nominated.

The musician is also in production on a hush-hush horror movie which is being sold by Endeavor Content.