Continue to Deadline SKIP AD
You will be redirected back to your article in seconds
Skip to main content
August 15, 2019 7:00am 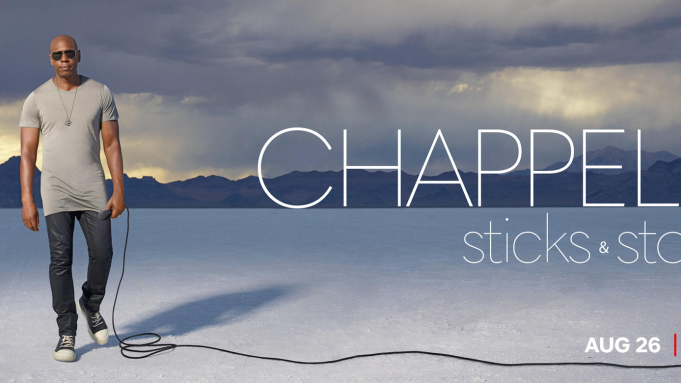 Dave Chappelle: Sticks & Stones, a new Netflix stand-up special, will bow globally on Mon. Aug. 26, the streaming service has announced.
The Netflix release continues Chappelle’s relationship there, one that’s seen him release multiple comedy specials over the last few years,. Chappelle was the mastermind behind the 2003 sketch comedy hit, The Chappelle Show—one of the highest rated programs on Comedy Central. The show earned three Emmy nominations, but ended abruptly when the star walked away. It went on to become the best-selling TV show in DVD history.

Chappelle won his first Emmy in 2017 for his debut episode on Saturday Night Live. He celebrated his 30th year in comedy that same year by releasing four stand-up specials on Netflix, all of which won Grammy Awards for Best Comedy Album in 2018 and 2019. He captured his second Emmy for Outstanding Variety Special with Equanimity in 2018.

His feature film credits include Bradley Cooper’s A Star is Born, Spike Lee’s Chi-Raq, Undercover Brother, Screwed, Blue Streak, 200 Cigarettes, and You’ve Got Mail, among many others.