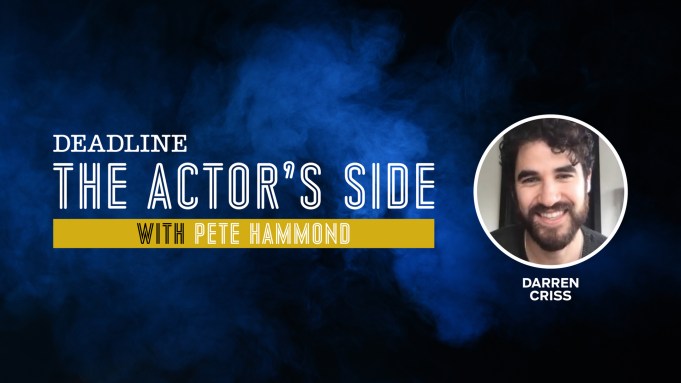 Welcome officially to our first-ever virtual season of my Deadline video series The Actor’s Side, which will run every Wednesday. Due to the coronavirus pandemic we are by necessity out of our usual studio and inside (via video) the homes of the actors we are talking with about career and craft this Emmy season; it makes for an even more intimate setting in some ways, certainly a lot of enlightenment and fun on my part to be able to keep the series going in a new and exciting way while we remain sheltered at home.

Today it is Emmy, Golden Globe, Critics’ Choice and SAG winner Darren Criss, star of among others Glee and the award-winning American Crime Story: The Assassination of Gianni Versace. He is giving us his side of the profession and in particular a real behind-the-scenes look at his latest effort: the seven-part Netflix limited series Hollywood from producer Ryan Murphy (also responsible for the two aforementioned shows with Criss), which serves as Murphy’s first big project as part of his huge Netflix deal.

I make no secret of my admiration for Hollywood, which is right up my alley and a binge-worthy entry this season that turns the table on the town. We talk about what it means to Criss to not only be a part of it in front of the camera as well as being an executive producer, a title and duty Murphy encouraged the actor to take on.

The series is set in the 1940s and offers a re-imagining of what Hollywood was at the time and could have aspired to be in a better world. It plays with history as we know it, and Criss actually has a really interesting take on it coming from a time right after World War II and that effect on society and airing now as a worldwide pandemic is raging.

“The layers of meta-ness are invincible,” Criss says while also talking about his character, one of the fictional ones in a show that does blend fact and fiction over the course of its seven hours. He plays a young wunderkind director named Raymond Ainsley, who is given the opportunity to helm his first big movie, Peg, and Criss muses about perhaps some real-life counterparts to the role, like a young Spielberg or Paul Thomas Anderson, and how youthful idealism led to great art.

He also makes a real comparison to none other than Murphy himself as an inspiration in how he played the part. Find out why.

We begin our conversation discussing his early breakthroughs on social media and YouTube  and the videosphere that inadvertently led to the career he is enjoying now, both musically and in acting across all mediums.

To watch our discussion click on the video above.