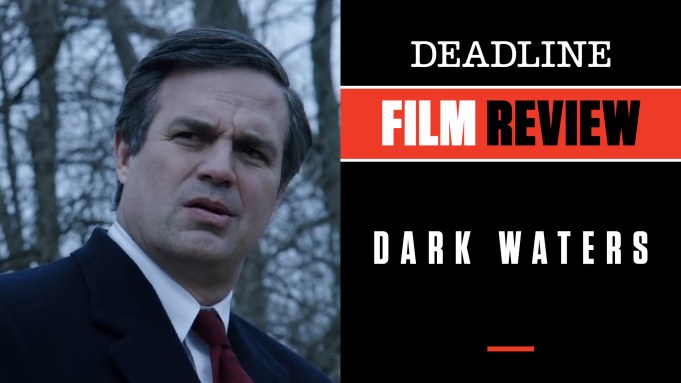 “Whistleblower” has become the hot word of the moment; I probably hear it uttered in one way or another 15 times a day in these times. But what it really means comes home in a big way when you see a single heroic whistleblower in action — someone like Robert Bilott, the lone lawyer who has waged a David-vs.-Goliath war against Big Chem and specifically DuPont for two decades now and counting and against all odds has made a positive impact on our lives. Mark Ruffalo, in a more superheroic role than even the Hulk, plays Bilott in the ripped-from-the-headlines new film Dark Waters, and it is not only an important movie that just might affect the way you live, it also is a hell of a political thriller in the vein of movies like Silkwood and The Insider.

Bilott works for a law firm representing Big Chem companies like DuPont when suddenly he is visited by a couple of West Virginia farmers, one being Wilbur Tennant (Bill Camp), urging him to take on their class-action case against his own client. It seems cattle are dying horrible deaths and toxic waste is being dumped into their river. Bilott grew up in the area, which is why they have come to seek his help. He reluctantly agrees, thinking this will be a simple case — that he can get his client to fix what is wrong in no time flat. Unfortunately it is just the tip of an iceberg as Bilott finds DuPont is doing things that eventually will affect the health of every living thing, humans included, unless they can be stopped.

This comes in the form of PFOA, a forever chemical that is creeping into our air, water and bloodstreams, notably even in Teflon cookware. Eventually he gets his boss, Tom Terp (Tim Robbins), to join in his solitary fight, and the battle to save lives and defeat their own client becomes one for the ages.

The film is based on “The Lawyer Who Became DuPont’s Worst Nightmare,” a New York Times Magazine piece by Nathaniel Rich, and it has been given great urgency for our times by screenwriters Mario Correa and Matthew Michael Carnahan and director Todd Haynes, brilliantly drifting into territory we haven’t seen him do lately, though I kept thinking of his indie film Safe a bit when I was watching this. What he has done is to imbue Dark Waters with a style of ’70s-era thrillers in which the evil forces are right in our corporations and governments. This film could not be more pertinent in the Trumpian era of continuing deregulation, letting these companies run wild despite warnings that we eventually might be destroying everything on our planet in the process.

Ruffalo never overplays it, always remaining respectful to the quiet, white-collar legal warrior he is portraying. He’s a hero in the vein of Atticus Finch or Woodward and Bernstein, and it is a great tribute to the real-life fighter who still continues to win millions for victims of this corporate negligence even today. Robbins has some powerful scenes as well, as does Anne Hathaway as Bilott’s wife Sarah, a woman who begins to feel her husband’s quest will ruin his career and their family. Camp is excellent as the farmer who started it all, and there’s excellent work on down the line from numerous actors including an underused Bill Pullman, who nails his few scenes. It should come as no surprise that the social-crusading, issues-oriented production entity Participant is behind this film, along with Focus Features, which puts the film into limited release Frday. Producers are Ruffalo, Pamela Koffler, Jeff Skoll and Christine Vachon. Check out my video review at the link above with scenes from the film.

Do you plan to see Dark Waters? Let us know what you think.