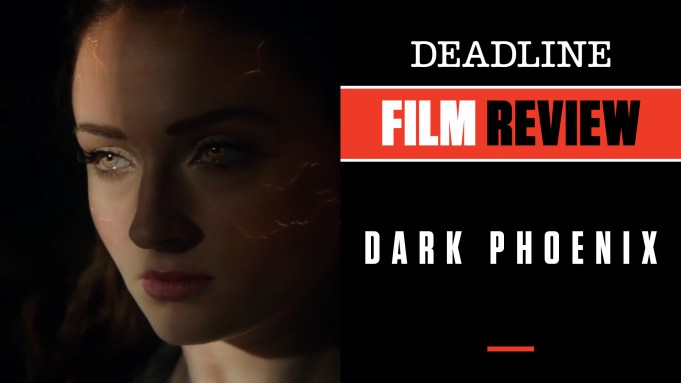 After 12 films in 20 years including sequels, prequels and spinoffs, we are now told this is the end of the road for the enormously successful, sometimes good, sometimes not-so-good X-Men franchise. Of course, in the Marvel world you should learn to never say never, but following the Avengers: Endgame finale and now with Dark Phoenix, a real good hint is that the filmmakers didn’t bother to do any easter eggs or added scenes during the end credits, even though hopeful fans waited for them.

That does signal the end here, and if that is the case this one’s a disappointment. Not that I was ever the ultimate devotee of this franchise to begin with, but I have to say the characters are engaging, the message of being different and finding your true self was valuable, and they were always competently made — something to look forward to in the MCU. Sometimes, as with the finale for Wolverine, Logan, they even soared to new heights for the genre, with that one earning an Oscar nomination for its screenplay which was unheard of for this breed.

Don’t worry about that happening here, but certainly writer-director Simon Kinberg, the longtime X-Men producer taking directorial reins for the first time in Dark Phoenix, might have taken a few hints from Logan on how to let this crew ride off into the sunset (he was a producer of that one too). There is no doubt Kinberg, an accomplished and expert writer-producer, has done a highly competent job behind the camera here, but the emotional closure fans are expecting falls dramatically flat for the most part, especially when you compare it with the recent Endgame which really knew how to send off its beloved characters. Here it is more by the numbers, and actually one of the least exciting editions of the series. There is a lot of talk during the first two thirds of the film, and it isn’t all that compelling. Even the demise of a major character seemed more to be trying to force tears, rather than actually earn them.

Part of the problem is the focus is just too much on one character: Jean Grey/Phoenix  played by Sophie Turner again as she did in 2016’s X-Men: Apocalypse (Famke Janssen played Grey earlier in the franchise). The Dark Phoenix plot picks up from Apocalypse more directly, although the opening scene involves Jean as a young girl fighting her telepathic powers (for good and bad) in the back seat of a car with her parents. Her powers overwhelm her, the car has a horrible crash, and we are led to believe both parents died.

Cut to several years later. We learn Jean has been brought up under the tutelage of Professor Xavier (James McAvoy), who is encouraging good uses for her mutant powers. There’s a lot of therapy going on here. Soon though, she is torn internally about using these powers at all, encouraged by Raven/Mystique (Jennifer Lawrence, returning for her fourth outing in the role) but not by Magneto (Michael Fassbender), who fights her tooth and nail as they seem on opposite tracts. There is an exciting scene as they try to get an upper hand (literally) with a chopper, and that works up a nice sweat in a movie devoid of much action to that point.

Actually, both Fassbender’s Magneto and Nicholas Hoult’s determined Beast are the two characters who really try to add some edge to the flatness on display for so much of the film. They are welcome every moment they get. Not so much though is the usually wonderful Jessica Chastain, who walks through the role of evil Vuk, an ethereal alien figure fighting to bring Jean to the dark side (hence the film’s title), with the ulterior motive of reviving her own moribund kind.

The rest of the cast including Mutants Tye Sheridan, Alexandra Shipp, Evan Peters and Kodi-Smit McPhee don’t have as much to do, but do it competently. If this film were only more concerned with a real ending, rather than the exploits of Jean Grey, it would have been worth the wait for what the song playing on that car radio at the film’s beginning is all about: “By the time I get to Phoenix.” It took 12 movies to get to Phoenix, but the results are dark indeed. Still, X-Men fans will be lining up, and for them it the movie is a “go.” For the rest of us, sadly, it is a “no.”

Hutch Parker and Lauren Shuler Donner join Kinberg as producers on this. Disney, now merged with Fox, releases it Friday. (I have to say, the most emotional moment for me was my relief in seeing the great 20th Century Fox fanfare at the opening of the film — no mention of Disney in sight. Some things are sacred.)

Check out my review of the movie which includes scenes from the film in the video above. Do you plan to see Dark Phoenix? Let us know what you think.