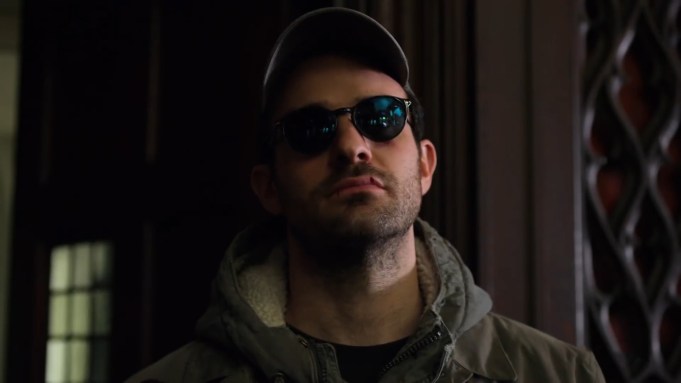 Launching exactly a week after Netflix canceled Iron Fist, Marvel’s Daredevil is back on the streaming service Friday for its long-awaited third season. Although its been more than two years and at least one Defenders miniseries since the series toplined by Charlie Cox and Vincent D’Onofrio last appeared on the small screen, the wait for more of The Man Without Fear is well worth it.

Now run by former The Man in the High Castle producer Erik Oleson, the dark and excellent new season of Daredevil picks up almost right after the end of last year’s Defenders team-up. As I say in my video review above, it is a comparatively raw, bare-bones and well-tuned affair that finds the heartsick Matt Murdock broken physically and psychologically. Based in part on the Frank Miller “Born Again” story from the Marvel comics, the new season features a somewhat soothing but no-nonsense nun played by a very well-cast Joanne Whalley; the well-aimed introduction of Wilson Bethel as the ruthless Bullseye; and regulars Elden Henson and Deborah Ann Woll delivering emotionally resonating turns. Featuring a corridor dust-up as in past seasons, the nicely paced 13-episode season also finds the Cox-portrayed Daredevil desperately taking the initial steps on the long road back to being the man he was and the Hell’s Kitchen hero he needs to be.

Still, as good as Cox is, in the best tradition of the best thrillers and crusader efforts, it is D’Onofrio’s villain that rules the roost from what I’ve seen of Season 3 so far. Now out of prison, Wilson Fisk manipulates his FBI handlers, moves around all the corrupt chess pieces, and frames the reality of the American dream and the manifestation of power in his own Kingpin image. It is a stint and a narrative that also serves as a pretty swift indictment of the way things really work these days in both the fictional and not-so-fictional New York and nation. Regardless of whether Daredevil comes back for another season on Netflix like Jessica Jones and more than likely Luke Cage are set to, D’Onofrio has planted a top 5 performance this season.

So, check out my video review of Daredevil Season 3 above for more of my POV on the Marvel/Netflix series. Will you be binge-ing Friday?