Continue to Deadline SKIP AD
You will be redirected back to your article in seconds
Skip to main content
March 16, 2021 1:45pm 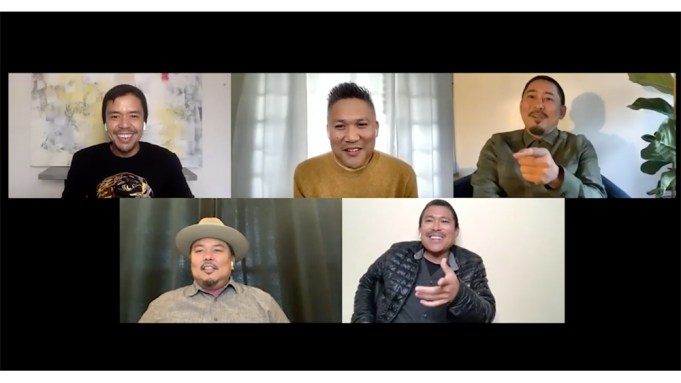 Dante Basco is known for lending his voice talent to Avatar: The Last Airbender as Zuko among many other animated characters. He is also known for empowering the creative communities and  Asian communities, but is probably most known to many as the iconic Rufio from Hook. With The Fabulous Filipino Brothers, he makes his feature directorial debut and what better way to do that than with your own family. Dante and his real-life brothers Derek, Dionysio and Darion Basco star alongside him in the family dramedy which premieres at SXSW Online today at 2pm PT. The brothers stopped by Deadline’s SXSW Virtual Studio to talk about the film.

It all started with one phrase: “write about what you know” and Dante knows his brothers. He wrote the film with Darion, Dionysio and their sister Arianna (who also appears in the film) to provide a platform for the family to play roles that Hollywood hasn’t let them play yet including stepping into the role of a leading man and comedy… lots of comedy.

“The stories come from bits of our real life,” said Dante. “We kind of embellished on some of those and then created these characters inspired by my brothers.”

The Fabulous Filipino Brothers is a tapestry of four vignettes that travel from the Bay Area in Northern California to the Philippinese. Each vignette focuses on one brother as they tell their own stories of love, family, culture and…erotic consumption of food (you’re not gonna want to miss that one). All lead to a wedding that some of their family might see as controversial, but in the end, it’s all about celebrating the Filipino culture and strengthening the bonds of brotherhood and family.

As Derek pointed out, this is one of the few times the brothers get to play Filipino. They previously played Filipino together over 20 years ago in the film The Debut. He said it was nice to be able to play Filipino in The Fabulous Filipino Brothers and that it was an ideal working environment.

“Since we have all worked together, we all know each other’s strengths and weaknesses,” Derek said in regards to working with his brothers. The version of them in the film was very close who they are in real life, but in an “augmented reality”.

Dionysio addressed the challenges and advantages of working with family saying that one good thing is that they get to be themselves and tell each other exactly what they want. “There’s a good shorthand with family members,” he said.

As Dante, Derek and Dionysio’s characters have more light-hearted moments with their vignettes (again, with Dionysio’s, segment you’ll never look at Filipino food the same again), Darion’s is a little bit heavier in tone. However, it speaks to his real-life role within the Basco brother dynamic. Darion said that his brooding, emo-like character and his vignette with Liza Lapira is naturally who he is and honors their parents’ experience in how they met.

The Fabulous Filipino Brothers is one of two films at SXSW with Filipino narratives (the other being Martin Edralin’s Islands). As the needle moves forward when it comes to Asian representation in Hollywood, Filipino stories are starting to get some shine. This past year, films like Diane Paragas’ Yellow Rose and Isabel Sandoval’s Lingua Franca debuted to great acclaim while PJ Raval’s documentary Call Her Ganda shined a glaring light on violence against the trans community and indies like Empty By Design by Andrea Walter (who serves as DP on The Fabulous Filipino Brothers) which hit the festival circuit to a great ovation. There is also a wealth of untapped talent in the Filipino American community with filmmakers like H.P. Mendoza and Marie Jamora who have both worked on indies but are rising through the ranks.

“It really just stars with doing movies — and doing more,” said Dante. “I don’t think we set out to do the definitive Filipino story but that being said, we wanted to tell a somewhat personal story to us. I wanted to [write] a love letter to my family and we happen to be Filipino American and that’s a big part of who we are.”