DGA Says They Won't Be First Guild To Bargaining Table: "Studios Are Not Yet Prepared To Address Our Key Issues"
Read the full story
December 28, 2022 10:58am 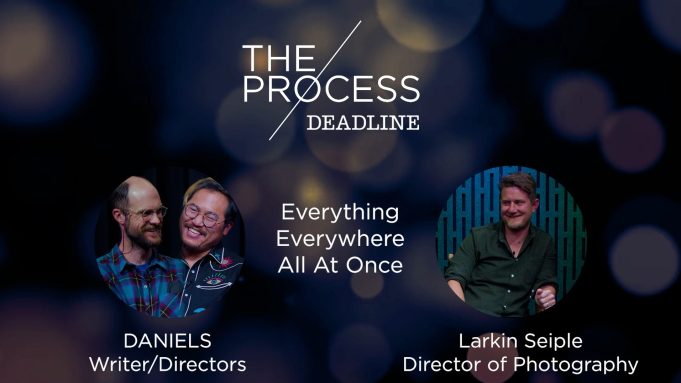 As the longtime cinematographer for Daniel Scheinert and Dan Kwan — the filmmaking duo collectively known as Daniels — Larkin Seiple’s task has typically been to honor the silly surrealism of their most “insane” ideas while finding ways to ground them, such that each moment feels “real or honest or meaningful.”

Take Everything Everywhere All at Once, Seiple’s most recent project with the filmmakers, as an example. In one his earlies conversations with Daniels about it, they discussed the possibility of a scene revolving around “a cat nunchuk.” The question the DP posed to himself then, as always, was, how could he make this concept “so real” that the audience would forget “how silly” it was?

“I think specifically with your guys’ stories, they’re so surreal and extraordinary that my job is to try to make them feel ordinary…so that you forget that you’re watching it, almost…,” Seiple tells Daniels in the latest edition of The Process. “A lot of it’s…just trying to ground it and make it feel like you’re actually there. Because that’s when I think your stories work, is when you believe. That’s the whole thing. It’s a magic trick. We’re just trying to make people believe in what they’re seeing.”

It’s Seiple’s embrace of Daniels’ sense of humor and sensibility, coupled with his storytelling instincts, his singular creative and technical abilities and his problem-solving skills that lead Kwan to refer to him as Daniels’ “secret weapon.” The DP has worked alongside the filmmakers for years — first on assorted shorts and music videos, and then on the features Swiss Army Man and Everything Everywhere — developing with them a singular “version of filmmaking” that allows them to pull off the seemingly impossible. From Daniels’ perspective, Seiple is so invaluable to that process that their films might not work at all without his contributions.

“[Everything Everywhere] would’ve just crashed and burned if you weren’t capable of improvising and responding and problem-solving on the day,” says Scheinert, “because there was just so much that we had to take one day at a time.”

Indeed, Daniels’ newest film for A24 is one that Seiple refers to as their most “elevated” to date. While it’s impossible to do justice to the martial arts-packed multiverse film via your standard logline, it centers on Evelyn Wang (Michelle Yeoh), an aging Chinese immigrant who is swept up in an insane adventure, in which she alone can save the world by exploring other universes connecting with the lives she could have led.

Remarkably, on Everything Everywhere, Seiple would need to help develop looks for nearly 150 different universes. 7-8 of those would feature heavily on screen, with 15 featuring to a lesser degree as “mini universes” and around 120 appearing in only a single shot. Each would pull on a different filmmaking genre, and a different set of references, such that viewers would be able to orient themselves to the narrative. “So much happens in [the film] that you need to have louder imagery for the audience to connect the separation between the variations on Michelles in different universes, which is why this one, it’s got a lot of looks,” says Seiple. “That wasn’t because we wanted it to look cool. It’s because we wanted people to actually appreciate where we were, and why we were there, and understand.”

Hitting theaters in March after world premiering at SXSW, Everything Everywhere All at Once is now A24’s highest-grossing film of all time, having grossed over $103M worldwide. Kwan and Scheinert directed the critically acclaimed box office smash from their own script and produced alongside Joe Russo, Anthony Russo, Mike Larocca and Jonathan Wang. Its cast also includes Stephanie Hsu, Ke Huy Quan, Jenny Slate, Harry Shum Jr., James Hong and Jamie Lee Curtis.

In his time on The Process, Seiple talks about his first time hearing about Everything Everywhere, early conversations and visual breakdowns of the film, its working title Bubbles, moments during production when he pushed back on Daniels’ visual ideas, navigating lighting challenges, devising LUTs (or Lookup Tables) with colorist Alex Bickel, and takeaways from the project that will inform his work going forward.

The DP also discusses the films he watched growing up, why his favorite creative conversations are often outside the context of his own department, his first music video with Daniels that had him shooting between 80 and 90 setups a day, the importance of finding
“playgrounds” to work in that make their productions possible (including the abandoned office complex where Everything Everywhere was shot), prepping and choreographing action on location, and more.

Daniels speak for their part to the film school perception of cinematography vs. the reality of what they’re looking for in this area, Seiple’s status as “the biggest fan of movies” out of their whole core team, how Seiple’s made their incredibly ambitious productions feasible, their feeling that Everything Everywhere wound up being “prettier than expected,” visual ideas for the film that didn’t make the cut, the scene Seiple joked would “make a great DVD extra,” figuring out how to shoot an epic fanny-pack fight in the course of one day, their divide-and-conquer strategy as co-directors, and the contributions to the film of other key collaborators including chief lighting technician Matt Ardine, among other topics.

View the full conversation above.