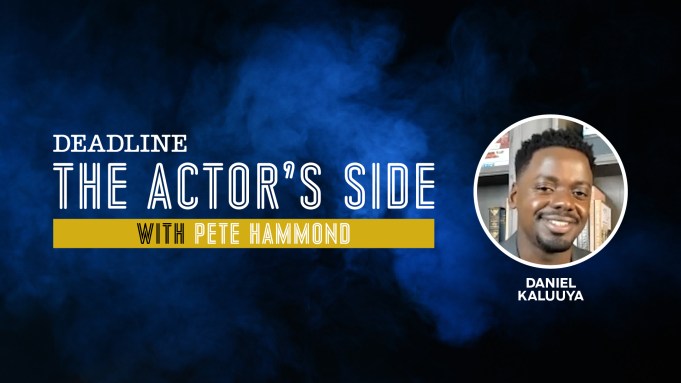 In a short amount of time, Daniel Kaluuya has taken the world of cinema by storm. Nominated for the Best Supporting Actor Oscar for his stirring role as Black Panther chairman Fred Hampton in Judas and the Black Messiah (a film that also netted a nomination in the same category for his co-star LaKeith Stanfield), Kaluuya has already collected Golden Globe and Critics Choice awards for the role, which as he tells me in this week’s edition of my Deadline video series The Actor’s Side is the part that has taught him the most about himself.

In our conversation he talks about what awards recognition means to him — this is his second Oscar nomination following his Best Actor nom for 2017’s Get Out, another movie that hit the zeitgeist, which we cover here as well. Kaluuya talks about the extensive research did to play Hampton, including the incredible fact that he rose to be chairman of the Black Panthers (Chicago chapter) and did it all before he was gunned down at age 21. He also talks about input Hampton’s mother and son had in helping shape the way he would play the part, and how this British actor approached, once again, using a distinct American accent.

He also talks process in re-creating the powerful speeches Hampton gave, developing an ability to deliver them in much the way a trained singer might — “the talking version of singing,” he says, partially using James Brown and Gospel as a guide. We also talk about how he drifted into acting, the huge opportunity appearing in the series Skins gave him, and what working on so many significant movies from Black filmmakers (Queen & Slim, Black Panther, Widows, Get Out, Judas and the Black Messiah) means in an era that seems increasingly removed — thankfully — from a time when it seemed only white directors got to tell stories of the Black community. Kaluuya actually says if he thought about that it would not make him want to do the movie. For this star, it is what the film is about that matters.

To watch our conversation and hear the actor’s side from Daniel Kaluuya, click on the video above.