Continue to Deadline SKIP AD
You will be redirected back to your article in seconds
Skip to main content
August 25, 2020 9:39pm
11Comments 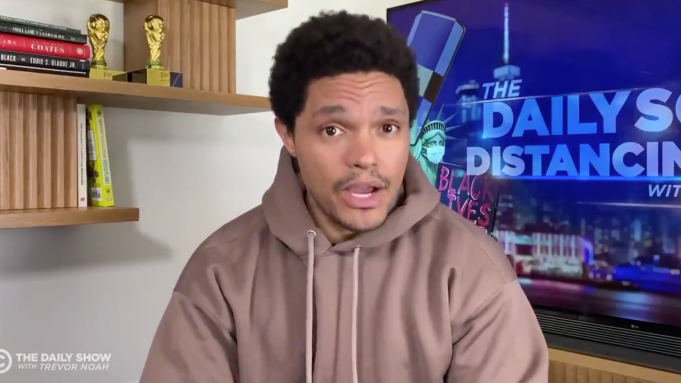 On Tuesday’s episode, Noah recapped the first night of RNC speeches and events. He noted that while last week’s Democratic National Convention featured a group of diverse speakers, including Congresswoman Alexandria Ocasio-Cortez and First Lady Michelle Obama, it’s not the only partisan event doing so.

“Last night the (Republican Party) showcased their diversity by giving speaker slots to all four of America’s Black Trump supporters,” he quipped.

Tim Scott, Vernon Jones, Kim Klacik and Herschel Walker were among the speakers for the RNC’s first night. Noah said giving Black conservatives a platform to support President Donald Trump also granted them the chance to combat notions that 45 and the GOP are racist.

He went on to highlight Jones’ speech, wherein the Georgia representative talks about how Democrats keep Black Americans in their “mental plantations.” While the RNC didn’t necessarily deny the existence of racism, Noah said speakers see it as less of a systemic issue and more like a “personal obstacle in the way of inspirational triumph.”

The Daily Show host went on to dissect Nikki Haley and Scotts’ speeches, which he said were the first night’s bests. While they shared their inspiring stories about their rise in politics, Noah said the politicians’ actual ascent into government positions is noteworthy.

“Here’s the thing about using their stories to show how exceptional America is, Haley and Scott are literally the exceptions,” he said. “The fact that Tim Scott is one of the only Black senators and Nikki Haley is one of the only minority governors is, if anything, an argument for the existence of systemic racism in America, not against it.”

While Scott and Haley’s accomplishments and rise in the GOP are impressive, it doesn’t necessarily make the case for equality in America, he said. Noah added that he hopes for the nation to get to the point where minority victories don’t have to be exceptional, but just as “easy as mailing a letter” pre-USPS troubles, that is.

“What I want is a world where a Black man becoming a senator isn’t inspirational,” he said. “That’s when Black people would have really made it.”

The Republican National Convention kicked off on Monday and featured speeches from a number of conservative personalities. Though the president did not appear on the first night of the convention, he is set to make appearances for the remaining nights. Vice President Mike pence, Ben Carson and Mitch McConnell are among those slated to appear at the RNC.

Watch full The Daily Show with Trevor Noah clip above.