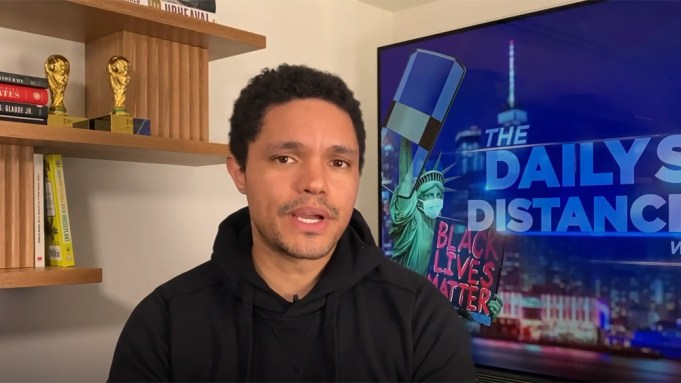 Months after protests broke out in response to the killing of George Floyd in June, Black Lives Matter demonstrations against police brutality have continued to stay steady. Voicing support for the movement and worrying about the right way to protest, however, shouldn’t be Americans’ main focus, Trevor Noah said on The Daily Show.

“I think sometimes in society, people get more focused on the symptoms than of the cause,” the late-night host said.

During Tuesday’s episode Noah brought attention to New York protests that broke out in response to the arrest and death of Daniel Prude. Body camera footage from March arrest showed officers shoving Prude, who had a spit sock over his face. After his arrest, Prude went into cardiac arrest and died.

“I’m all for the Black Lives Matter movement and fighting against systemic racism and police brutality, but it’s not acceptable to storm a restaurant and just flip over tables. First you introduce yourself,” Noah quipped.

He went on to acknowledge that the COVID-19 pandemic and numerous social justice movements have made for “one of the most stressful times in modern history,” but admitted that honest conversations, though difficult, are necessary to understand protestors’ frustrations.

“I think the real question we should be asking is why does there need to be a protest in the first place. If I had a magic wand I wouldn’t be trying to fix protests, I would use it to get the police to stop brutalizing Black people, that’s why protests are happening,” he said.