Continue to Deadline SKIP AD
You will be redirected back to your article in seconds
Skip to main content
June 10, 2020 11:51am 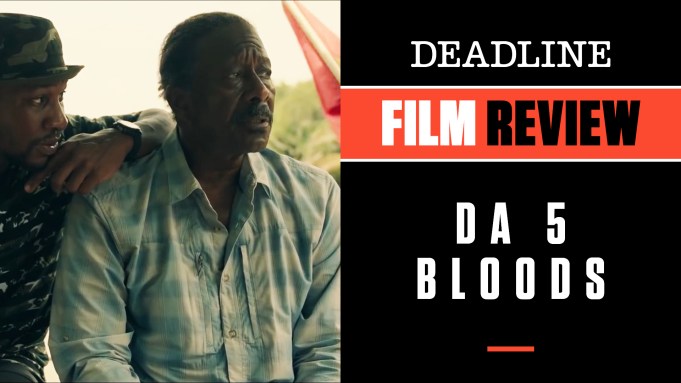 Although it wasn’t intended this way, the timing of the release of Spike Lee’s Da 5 Bloods is right on. Lee has directed and co-written a film that speaks to this moment in extraordinary ways, even though its main focus is on events that happened a half-century ago but unfortunately still reverberate.

The iconic filmmaker often has been ahead of the curve with his most pressing works including 1989’s Do the Right Thing, which I just revisited last summer during its re-release in theaters 30 years after its opening. It has proved even more relevant in the months since, a prescient film that sadly still speaks to the times in which we live (check out Lee’s gut-wrenching new short 3 Brothers for further proof of that). And 2018’s summer release of BlacKkKlansman showed the director, now four decades into an extraordinary career, at the top of his game with his Adapted Screenplay Oscar-winning film that put racism and other targets under the microscope in fresh ways that also resonated.

Lee has a unique ability to inform, comment, enlighten and entertain all at the same time, and he has done it again with this rousing and provocative adventure for Netflix, a film that traverses a landscape of themes including grief, regret, greed, morality, shame, racism and more, weaving in and out of a 2½-hour-plus running time that never wears out its welcome.

Da 5 Bloods tackles another highly divisive moment in American history with the Vietnam War and channels it through the lens of the not-often-told African-American experience in fighting this disastrous conflict. Taking a script initially written by Danny Bilson and Paul De Meo that told the story of four white servicemen returning decades later to Vietnam to retrieve gold they had left behind, Lee and Kevin Willmott, his Oscar-winning collaborator on BlacKkKlansman, refocused the idea to zero in on four black veterans going back to Nam to retrieve the remains of their squad leader Norm, aka Stormin’ Norman (Chadwick Boseman) who was killed during a battle. They also want to locate and bring back those bars of gold Norm helped them hide. It would be a payback of sorts for the sorry treatment of black soldiers who were sent in disproportionate numbers to fight a losing war only to come home to a country that offered no thanks for their sacrifice.

Through each of them, the movie demonstrates the slow-burning effect of that experience on the rest of their lives. Paul (Delroy Lindo) is an increasingly lost soul, suffering from PTSD he never could define and now an apologist for Donald Trump as his own desperation led him to believe campaign rhetoric that America would be great again, even for him. He still wears the MAGA hat, even though the promise remains empty. Otis (Clarke Peters) was the medic who might have left behind a daughter he never met. Eddie (Norm Lewis) is a firm proponent of the Black Lives Matter movement and perhaps the most successful of the group but now is teetering on bankruptcy for his business. Melvin (Isiah Whitlock Jr.) is the party guy of the bunch, the most carefree despite whatever roadblocks life tosses at him. Showing up in Ho Chi Minh City unexpectedly is David (Jonathan Majors), Paul’s frustrated son, who joins the quartet in their search for the chest of gold bars that a French international exporter (Jean Reno) has promised to transfer into currency for them.

Using a variety of differing aspect-ratio filmmaking techniques, along with a strong homage to such classics as Apocalypse Now and the great 1948 Humphrey Bogart adventure The Treasure of the Sierra Madre, Lee crafts a pertinent, lively and entertaining look at then and now, offering up new visual innovations from this constantly evolving artist.

Boseman’s Norm, seen in flashbacks, is an inspiring leader who clearly showed he was capable of telling real truths about who they were and how they got there in scenes in which the four other stars are not de-aged (a la The Irishman) or played by younger versions of themselves, but rather just appear as they do in the present-day scenes. It is an arresting sight at first but one that works beautifully when you realize this view of their past is being played out in their memories of it.

All of these theater-trained actors are simply superb, as you might expect, with Lindo a true standout in a turn that should be remembered come Oscar time. Majors, who was brilliant in one of my top 10 from 2019 called The Last Black Man in San Francisco (a must-see film to rent and watch again or for the first time right now), also is excellent here, as is a supporting cast as the locals including Le Y Lan as a former lover of Otis’, Vinh Tran as their guide and Nguyen Ngoc Lam as a current Vietnamese officer also on the hunt for the gold. Melanie Thierry, Paul Walter Hauser, and Jasper Paakkonen make up a anti-mine group who encounter the vets in a nail-biting key scene expertly choreographed by Lee.

The production credits are top-drawer with a special shout-out to Newton Thomas Sigel’s stunning camera work and Lee veteran Terence Blanchard’s lilting score, which has been augmented by songs from Marvin Gaye’s seminal album of the period, What’s Going On.

As for Spike Lee, his time-honored tradition of juxtaposing a fictional narrative with devastating documentary footage of real events never has found a better purpose than how that technique is used here. At 63, this is a filmmaker at the very top of his game in every department. It is one hell of a movie.

Producers are Jon Kilik, Beatriz Levin, Lloyd Levin and Lee. Netflix releases this perfectly timed Spike Lee Joint on Friday. Not to be missed. Check out my video review with scenes from the film at the link above.

Do you plan to see Da 5 Bloods? Let us know what you think.