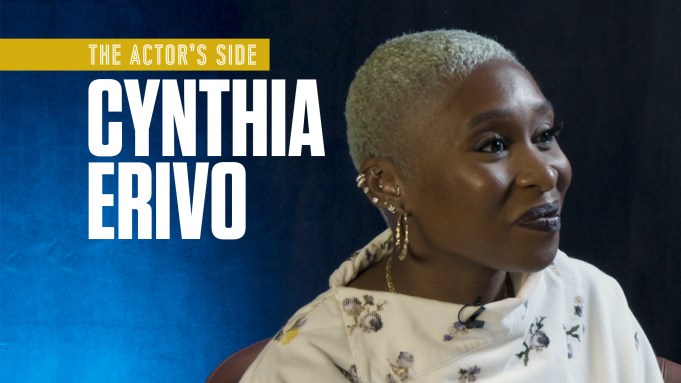 Cynthia Erivo is just one Oscar away from adding her name to the exclusive club of EGOT winners — meaning Emmy, Grammy, Oscar, Tony. You might recall she won the Tony for her stirring portrayal of Celie in the Broadway revival of The Color Purple, a show she first played in London. The Emmy came for a TV performance of a song and scene from the show, and the Grammy came for the cast album.

Her Oscar shot has nothing to do with that show, but it did open doors to Hollywood because just last year she co-starred in two big fall movies: Steve McQueen’s Widows and the noirish Bad Times at the El Royale, playing a leading role in the latter — something that shocked her when she was hired. That anecdote is how our interview starts for this week’s edition of my Deadline video series The Actor’s Side.

In both of those movies Erivo got to play badass women. Her latest role is of a more historical nature in the Harriet Tubman biopic Harriet, which opens Friday in theatres and tells the story the remarkable abolitionist and leader of a movement to free slaves by using the Underground Railroad. Once Tubman escaped to the North and her own hard-won freedom, she kept returning time and time again to free as many slaves as she could in sometimes treacherous conditions. (Erivo tells me that the entire crew was attacked by a swarm of wasps while making the movie.) Oh, and the character has something in common with those other roles Erivo has played on film because Tubman herself is as badass as they come.

Erivo and I talk about all aspects of playing this amazing woman and also why it has taken Hollywood all this time to bring her story to the big screen. It is astonishing that it has never been told before in a major motion picture, but it is now and Erivo just might be adding an Oscar nomination to her impressive résumé, and she has two shots to complete that EGOT, since a Best Actress nom is likely as well as one for a song from the movie, “Stand Up,” which she co-wrote. To watch our conversation, just click on the link above.