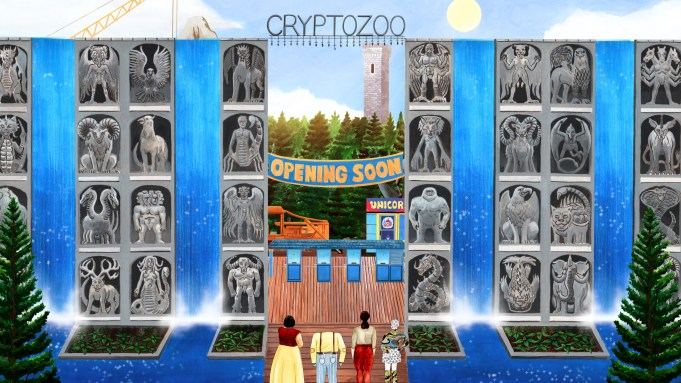 Even though Cryptozoo filmmaker Dash Shaw and animation director Jane Samborski started work on their avant-garde toon five years ago, the comedic adult animated pic has an eerie resonance in the wake of Netflix’s hit docu-series Tiger King.

It’s not to say that any of the female cryptozookeepers have the spitfire flamboyance and audacity of Joe Exotic, however, there might be a tad of Carole Baskin in them when it comes to the struggle of preserve versus profit. For, these cryptozookeepers debate whether to display these rare beasts in the confines of a cryptozoo, or if these mythical creatures should remain hidden and unknown. In the film, cryptics are half beast-half human folk like Medusa and Centaurs. The movie follows female cryptozookeepers who are struggling to capture a rare dream-eating hybrid creature, the Baku. The government is after the Baku as well.

“We’re in a time where we have sort of had a rough brick will of reality smash us in the face,” says Lake Bell, who plays Lauren Grey in the film.

Expounds Bell, “I was really attracted to not knowing much about it (the project) and being able to commit in full force into the hands of Dash and Jane to realize this character in Lauren, who I think has all the compassion in the world. And it’s interesting the subject of compassion and altruism, thinking you’re doing the right thing to protect. That is something I’m interested in, just being part of the human experience. We all consider ourselves as good people and how that unravels in the film in the protection of creatures that she thinks are needed. At at time when there are cultural and social resonance in the themes in the movie, which weren’t necessarily intended, because obviously you can’t look into the future and know what happens, we all started making this four years ago. So, it’s always interesting to see how that unravels and unfurls when looking at where we are in our humanity in our landscape.”

Cryptozoo is being sold by UTA. It premieres today at 12noon PST.