Continue to Deadline SKIP AD
You will be redirected back to your article in seconds
Skip to main content
September 15, 2021 9:00am 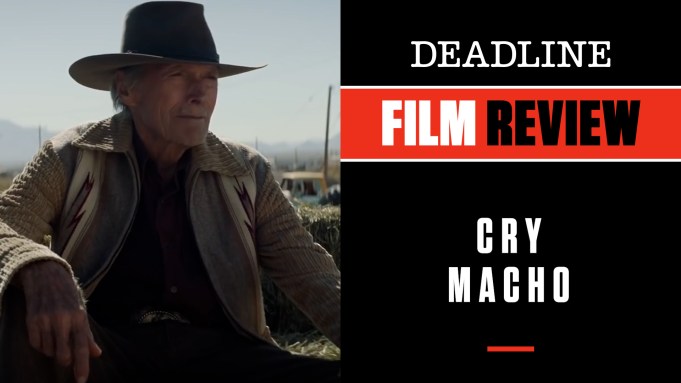 You have to admire Clint Eastwood. The 91-year-old legend and icon waited 33 years to at last sink his teeth into a humane and entertaining road trip of a movie that he once passed on because he felt he was too young. That was when he was 58.

Now the time has come, and Cry Macho finally has come to fruition. The result is very welcome indeed. As laid back and easygoing as the man himself, who isn’t moving as fast as he once did, this mostly is a story of the relationship of an ex-rodeo champ far beyond his prime after being heavily injured from a fall off a bronc and, after tragically also losing his family, discovers life is still worth living on a journey to bring the 13-year-old son of an ex-boss, to whom he owes a favor, back from the clutches of his mother in Mexico all the way to the Texas border.

They say Hollywood caters to the younger generation and ageism is rampant, but that doesn’t apply to Eastwood, or to producer Albert S. Ruddy, who is also 91 and has hung on to the hope of getting this film adaptation of N. Richard Nash’s novel to the screen for no less than 46 years. Talk about development hell! The property passed through the hands of Roy Scheider, Burt Lancaster, Robert Mitchum, even Arnold Schwarzenegger (both before and after he was California governor) until Eastwood, looking for his next project, recalled the script and brought it back to life not only as the star but also director and a producer. Has there been anyone in Hollywood history more attuned to what makes them work as a filmmaker and movie star than Eastwood? I think not, and Cry Macho fits him like a glove. It’s pure pleasure.

Sure, the movie is not set to the mantra of most modern action films, but that laconic pace is not only just right and welcome here, it is actually soothing to see the guy who played Dirty Harry take on the role of Mike Milo, who reluctantly agrees to go to Mexico to find the boy and bring him back to his father. Never mind that he wasn’t told the whole truth about the assignment, he owed his friend and ex-boss, Howard Polk (Dwight Yoakam), the favor and, down on his luck, decides he will do it. It is actually classic Eastwood: the loner who rises to the occasion.

Mike first has to deal with the boy, Rafo (newcomer Eduardo Minett), and especially his mother, Leta (Fernanda Urrejola), who dismisses him as just the latest sent by her ex to retrieve the boy. None of those previous attempts was remotely successful. She and her No. 1 henchman, Aurelio (Horacio Garcia-Rojas), make it clear that Mike will not succeed either, but they would be wrong. Urrejola plays the one-dimensional role with grit and alas stereotyped villainy. There is simply no depth to the character or, for that matter, the one-note badness of Aurelio, who along with Leta just serves basically as a plot device. They seem to exist just to add a layer of tension, the predictable bad guys going after the good guys, as it were.

Their menacing presence does not stop Mike, who finds Rafo as he is about to enter his rooster named Macho in a cockfight before police break up the proceedings. After luring him, and the rooster, out of hiding, he explains his mission, and eventually the trio is off on the road back to the U.S. border. It all becomes something of an episodic affair, with various encounters along the way and close calls with Leta’s gang, but they are never truly threatening in a way that most movies routinely offer up sickening violence these days.

The emphasis here is on the budding relationship between Mike and the boy, an increasingly apparent stand-in for the family Mike no longer has. The best sequence finds them hiding from those who are on their tail at an out-of-the-way diner and inn run by the warm and understanding Marta (a wonderful Natalia Traven). She welcomes their presence, especially Mike, with whom she strikes up a budding romance before circumstances demand that they continue on the run.

Their journey continues, even with a showdown with cops, who think they are running drugs. No, not the case. That would be Eastwood’s previous hit, The Mule, so let’s not confuse things. Eastwood’s Mike actually is pretty funny in confronting the cops and their false assertions when all he wants to do is get on with delivering his “bounty.”

Clint Eastwood’s first feature directorial effort was exactly 50 years ago with the still-haunting Play Misty for Me. He hasn’t lost his touch, even being forced this time to work with kids and roosters (11 of the birds were used in various ways for the title star). In fact, this rooster is the most satisfying teaming for Eastwood with a non-human since that orangutan in Every Which Way but Loose. I just sat back and smiled watching this film, knowing I was still in the hands of a complete filmmaking pro who doesn’t resort to cheap tricks or tired clichés. Eastwood plays Mike as a guy with a lot of mileage on him but still a big heart and a sense of a decent human being. He and Minett have genuine chemistry, and Traven adds much to the ambiance. The screenplay, originally by the late Nash himself, has been updated and expertly tuned to Eastwood’s needs by Nick Schenk (Gran Torino, The Mule), who clearly gets just the right rhythms for the star-director.

Cry Macho, shot in picaresque New Mexico locations, may have taken its own sweet time to get to the screen, but the timing right now is just about perfect. Warner Bros releases it in theaters and HBO Max on Friday. Choose a theater over the streaming option, and just let it take you exactly where Clint wants you to go. Check out my video review with scenes from the film at the link above.

Do you plan to see Cry Macho? Let us know what you think.