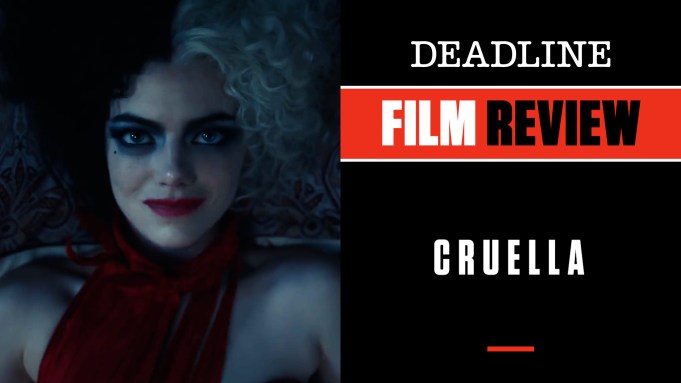 Offering two superb Emmas (Stone and Thompson) for the price of one, Disney’s anticipated reboot of one of its chief villains, the much-feared Cruella de Vil, is given new life by taking the origin-story route favored by comic book reinventions such as Joker rather than the fairy tale route employed by the Mouse House for the pair of Maleficent stand-alones from the classic Sleeping Beauty.

Credited to Dodie Smith’s 1950’s book, The One Hundred and One Dalmatians, this version goes light on the Dalmatian angle favored by Disney’s 1961 animated gem 101 Dalmatians, as well as its 1996 and 2000 live-action cousins that starred a deliciously over-the-top Glenn Close (who, BTW, is listed as an executive producer on this new take), Cruella tackles an origin story of the eponymous bad girl who, sporting fun coats made from the hides of Dalmatian puppies, is a bridge too far in the era we live in now. In fact, the studio is avoiding any bad blood with the canine world in this version, as it even urges dog adoptions during the end credits and keeps the pooches to a minimum in the movie. Cruella herself is is cast as very dog-friendly with Buddy and Wink, and the Dalmatian angle is left to archnemesis (and the real villain of this piece) the Baroness von Hellman, played to the hilt by Emma Thompson. She shows up with a trio of Dalmatians who are set loose for various missions, but at least not serving as outerwear.

This Disney version is trying to be oh-so-hip, getting an edgy treatment from director Craig Gillespie, whose filmography includes offbeat items like I, Tonya and Lars and the Real Girl, plus a screenplay by Dana Fox and Tony McNamara (Story by Aline Brosh McKenna and Kelly Marcel & Steve Zissis) that sets most of the action in the punk-filled 1970s London. The film, however, begins earlier than that, introducing us to young Estella (Tipper Seifert Cleveland), a girl who marches to her own drummer, dyeing her natural black-and-white hairstyle red to avoid bullying by other kids. She adores Catherine (Emily Beecham), the only mother she has known, until tragedy befalls Mom when they go to visit a fancy mansion where the Baroness holds court. Mother falls to her death on the rocky cliffs, but before that happens, she gives Estella her priced necklace.

Cut to several years later, and Estella (Emma Stone) now is palling around with low-level thieves Jasper (Joel Fry) and Horace (Paul Walter Hauser), doing small jobs. Then Jasper actually facilitates a janitor gig for her at big department story, Liberty, where she manages to stay employed until her designer aspirations get the better of her. Then she sneakily hijacks the store’s fashion showcase window for an offbeat display that gets her fired — until the Baroness, doyenne of all things fashion, notices it and brings her into her employ. Of course, the Baroness is no picnic, and there is the matter of Estella noticing she somehow is wearing the necklace her mother bequeathed her and wants it back. She and her cronies set out to the Baroness’ black-and-white ball, where Estella, in wickedly inventive garb and now unrecognizable, steals the show (among other things) and becomes London’s newest sensation. Adopting the name — wait for it — Cruella, in the process she makes a discovery that ratchets up the stakes as her flash appearances enrage the Baroness, all the while intriguing her. Is the Baroness really the one who gives birth to the dark side of the new age punk incarnation known as Cruella?

Stone is perfect casting here, managing to give more than one dimension to the young Cruella and keeping us curious as to how she eventually will inhabit the all-out villainy of the evil presence she inhabited in the previous Disney outings. Gillespie’s road map really does owe a lot to past DC and Marvel origin stories, no question. Thompson is having a blast playing this fashion icon who takes no prisoners, and Fry and Hauser are a great duo in support of their friend who is taking London by storm. There is also nice supporting work from Kirby Howell-Baptiste as a former Estella schoolmate now working as a photographer for a top tabloid; John McCrea as Artie, who helps unlock the new Cruella’s sense of style; and Mark Stone as John the Valet, who works for the Baroness but has his own ideas.

Production credits are top of the line, with a special shout-out to Oscar winner Jenny Beavan’s outrageous costumes. Producers are Marc Platt, Andrew Gunn, and Kristin Burr. Check out my video review with scenes from the movie at the link above. The movie will be released Friday in theaters and on Disney +, with special premium pricing for subscribers.

Do you plan to see Cruella? Let us know what you think.