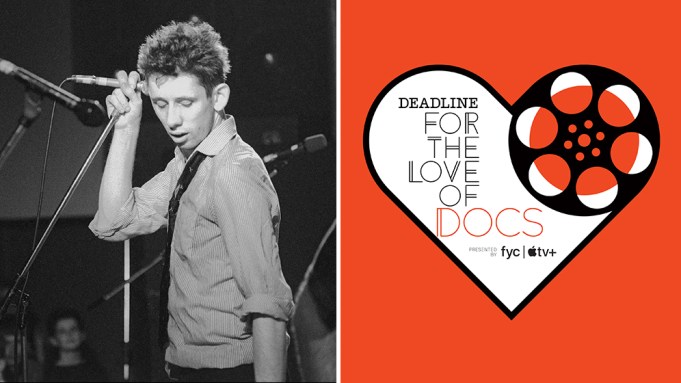 With music documentary Crock of Gold, director Julien Temple got his shot at A Few Rounds with Shane MacGowan, the celebrated artist, best known as the composer and frontman of Celtic punk band The Pogues.

Juxtaposing never-before-seen archival footage, family photography and animation, the project proved fascinating to Temple, on a number of levels, but it wasn’t one he’d long envisioned taking on. In fact, as an artist who had been ensconced in the punk world since the late 1970s, the director felt like he was done covering the scene. “You know, I keep saying I’ve done all I need to do about punk rock, and put the lid on it,” Temple told Deadline’s Anthony D’Alessandro, during a For The Love Of Docs panel, “but it keeps coming out of the grave and strangling me again.”

Temple’s reluctance to tell MacGowan’s story was further supported by his first-hand knowledge of the artist. “I was the first person to ever interview Shane [on film], in 1976,” the director said. “His reputation and legend precedes him, doesn’t it? He’s not the easiest person to make a film about, I don’t think.”

The person who convinced Temple to make the film was MacGowan’s longtime friend, Johnny Depp. The three-time Oscar nominee would ultimately sing the artist’s praises, alongside Bono and Nick Cave, as one of Crock of Gold’s documentary subjects.

“I’ve known Johnny a long time, as well, so I started thinking about it, and then I thought, wow. What an amazing subject this man is. What amazing music, what amazing lyrics, but also, what an extraordinary trajectory through life,” Temple explained. “It’s like if Keith Richards hurled a javelin, this guy’s thrown one about three times as far.”

Aspects to MacGowan’s life that appealed to the director included the “wonderful tragedy [and] triumph in the man,” as well as his cultural identity, as an Irish musician raised in England.

“It’s been kind of written out of English school history, what happened between England and Ireland. So, it was interesting on that level,” Temple said. “I think of the films I’ve done as all joining up to be one big map of this post-war English cultural history, and certainly, the Irish-London-Shane MacGowan thing was a gap in that map. So maybe it was meant to be.”

When Temple first announced that he’d be making Crock of Gold, he compared MacGowan to an elusive snow leopard in a David Attenborough film, whose force of personality he could only hope to capture on camera.

In conversation with Deadline, Temple expounded on that idea, and the traps he tried to set, to bring out the truth of the man. “The biggest trap we laid was in [County] Tipperary, at the farmhouse that he spent so much time as a child in. It’s an extraordinary house because it’s unchanged. It was like being in the 18th century,” he said. “We lit the fire and had it burning for about a week, so the house was nice and dry and warm for him, and we waited every day for him to get in the car from Dublin. The trap was set, but the snow leopard never showed.”

From the director’s perspective, MacGowan’s elusiveness reflected the musician’s desire to assert a level of creative control over the film. “He just refuses to do things, to the extent you find yourself completely painted into a corner, almost. So, you’ve got to be more inventive and try to bust out of that. I hope the film shows his influence, his imprint in that way,” Temple said. “The difficulties of the shoot, I do believe, probably made it a better film in the end. So, the snow leopard knows what he’s doing, I think.”

Last month, Crock of Gold won the Special Prize of the Jury at the San Sebastián International Film Festival. For more from our conversation with Temple about the Magnolia Pictures doc, click on the video above.