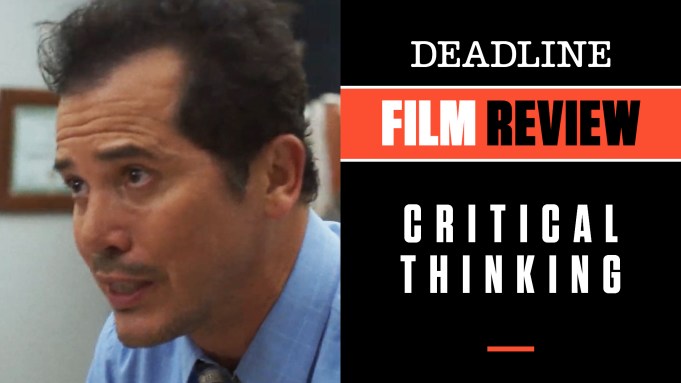 Movies set in the classroom with inspiring stories about teachers and their students has been a staple of Hollywood films from Goodbye Mr. Chips and To Sir, with Love to Up the Down Staircase and Dead Poet’s Society. A new one, Critical Thinking, has more in common with the grit and outsider spirit of the likes of Lean on Me, Stand and Deliver and Denzel Washington’s The Great Debaters, and, like the latter three, it is based on real people and true stories.

Ever since a ragtag underdog group of inner-city kids at Miami’s Jackson High School found themselves going from zero to 60 in the world of competitive scholastic chess in 1998, Hollywood has been trying to figure out how to bring their story to the screen. It finally came together when John Leguizamo was offered the starring role as teacher Mr. “T” Martinez and was so taken with the story of bringing a group of underprivileged students to the National Chess Championships against all odds and expectations that he also signed on to direct; it’s his first feature behind the camera since the 2003 TV movie Undefeated.

It is easy to see why he was attracted to the material as it also offered a real opportunity to bring some much-needed Latinx representation to movies in a way that isn’t stereotyped but rather human and inspirational. In the two years since the film was shot (in under a month on a tight indie budget), it seems more important than ever, especially now as it heads to a VOD release rather than the originally hoped-for wider theatrical route that became impossible in light of the pandemic. With the whole idea in joepardy of even having kids actually go to school in person in this COVID age, the movie brings a bit of comfort about what one on one connection and shared purpose can mean for the human spirit. Among other things, it serves at the very least as a much-needed reminder.

The real participants served as consultants on Critical Thinking, and that gives the mechanics involved some real street cred as the young actors were put through what essentially is a chess boot camp in bringing this story to life with real authenticity. Leguizamo also has cast the film exceptionally well, with each key player owning a distinct personality and the message of the film’s title coming through as a life lesson worth learning.

The script from Dito Montiel — a fine director in his own right — can’t avoid all the tropes of underdog sports stories but does remarkably well in making Critical Thinking stand on its own in the genre. It’s honest without caving to predictable forced moments of sentimentality. Much credit to Leguizamo, who nicely underplays Martinez, getting his determination to succeed for his kids first and foremost but avoiding the gung-ho clichés. As members of the chess team, chief among standouts is the excellent Jeffry Batista as Cuba-born Marcel and Jorge Lendeborg Jr. as Ito, a kid unfortunately involved in drug violence. Corwin C. Tuggles, Angel Bismark Curiel, and Will Hochman all have their moments as well. The strong ensemble favors the younger stars-to-be but still sports some good support from the likes of Rachel Bay Jones as the hardnosed and not-too-helpful principal, Michael Kenneth Williams and others.

Critical Thinking has teachable moments and real heart in a movie that was well worth all the years it took to reach our screens. Producers are Scott Rosenfelt and Jason Mandl. Carla Berkowitz is the executive producer who helped shepherd the film over the course of a couple of decades as well. The movie originally had been slated to premiere at SXSW in March, but those plans obviously changed when the physical fest was canceled. Vertical Entertainment sends it out on September 4 just as school year, such as it is, begins in earnest. Check out my video review with scenes from the film at the link above.

Do you plan to see Critical Thinking? Let us know what you think.