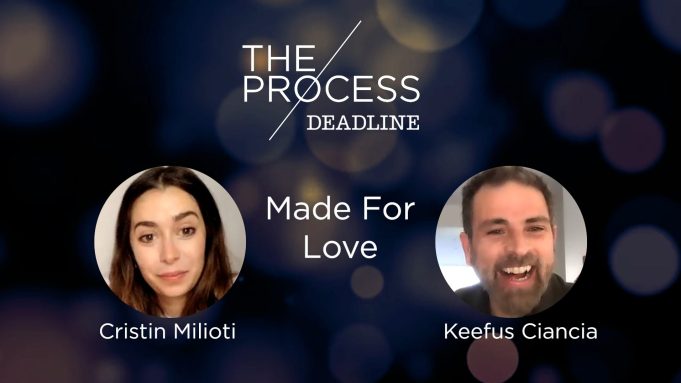 When Cristin Milioti set out to shoot Made for Love, she was already thinking about how the score for the show might sound.

She was curious particularly because the dark comedy was so tonally nuanced, presenting distinct storylines that you might not expect to see juxtaposed within one cinematic universe. “[There are] these…two things going on at once,” the actress noted. “You have this high-end space bubble, and you have this literally covered-in-dirt story of a father and a daughter who have been estranged, who are trying to get through each other’s walls.”

Milioti had to wait for the show to go to air to hear its score, penned by Emmy nominee Keefus Ciancia. But when it did, his music immediately resonated. She understood at that point that she and Ciancia understood the show in exactly the same way.

In an appearance alongside Milioti on The Process, Ciancia expressed how gratifying it was to hear this kind of feedback. “It is always a thing that I finish music for these projects and quite a lot of the time, I don’t speak with any of the actors,” he said. “I just sometimes wonder if actors are like, ‘God, he’s completely ruining this.’”

Executive produced for HBO Max by showrunner Christina Lee, Alissa Nutting and Patrick Somerville, Made for Love is based on Nutting’s 2017 novel of the same name. The show centers on Hazel (Milioti), a woman who escapes from her suffocating 10-year marriage to tech billionaire Byron Gogol (Billy Magnussen), only to realize that he has implanted a revolutionary monitoring device in her brain, which is tracking her every move.

Unlike many of our guests on The Process, Milioti and Ciancia never got to work together directly on their series. In fact, their appearance on The Process marked their first time ever meeting. Still, the Made for Love creatives seemed to bond immediately.

Milioti expressed her belief during their conversation that in a certain sense, she and Ciancia are actually collaborators, even if that collaboration was defined by “this blind handing off” of her performance. “I think of what we both do as actually so similar, [even though] the day to day is very different,” she said. “We’re using similar parts of our soul and atoms, and memory and heart and brain.”

At the end of the day, both artists were looking to tap into the magic of collaborative storytelling—to produce one story, in Made for Love, that was greater than the sum of its parts. “At its best, we’re tapping into a flow that is so much bigger than us…We all put up with this horrific, abusive industry because we’re all looking to tap into that flow again, that you get to tap into sometimes,” said Milioti. “I also love collaborating with the people that I get to meet, [because] it does feel very musical. It feels like a band, at its best.”

During his wide-ranging conversation with Milioti, Ciancia talked about “going with [his] goosebumps” as a composer, his love of “collaging” sounds, and “this whole genre of Space Age bachelor pad music” that influenced his score. He also broke down his path as an artist, from playing music in his basement, in his remote Colorado hometown, through collaborations with T Bone Burnett, and his work as a composer in film and TV.

For her part, Milioti further expressed her admiration of composers, sharing how music influences her process, as an actor, as well as the way she moves through the world.

On The Process, the pair also discuss their love of the mellotron, their shared experience of performing in jazz bands, their favorite film soundtracks of all time and more.