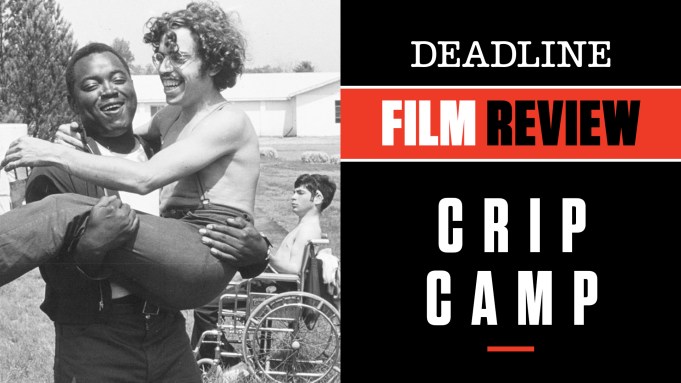 You probably can tell right from its title that the blissfully politically incorrect Crip Camp is not going to be the standard documentary about the lives of America’s disabled population. Far from it. This freewheeling, uninhibited, lively and spirited film takes a different and refreshing approach that makes it a winner in anybody’s book.

It is the latest to come from (among others) Higher Ground, the production company formed by former President Barack Obama and former First Lady Michelle Obama in association with Netflix to make movies that put the focus on important aspects of life in our times. Their first, American Factory, won the Best Documentary Feature Oscar last month, and I wouldn’t be surprised to see them in contention for this one next year. It already won the prized Audience Award at this year’s Sundance Film Festival.

Perhaps the reason Crip Camp is so effective and affecting is that its co-director Jim LeBrecht is the real deal. Now a celebrated sound mixer who has worked on several theater productions and documentaries, as a kid he attended Camp Jened, a summertime destination in New York’s Catskills and right near Woodstock. In fact, he was there right about the time of that fabled music gathering in 1971, right down the road as it were. This camp was like no other — a place where kids with disabilities could be themselves, accepted as teens like anybody else without the stigma of a handicap that makes them personally feel like one of society’s outcasts. They play sports, they make out, they even smoke, and they are anything but what you might expect in this environment. It’s kids being kids, human beings like everyone else.

LeBrecht thought the story of Camp Jened, which opened in 1951 and had to close in 1977 due to financial difficulties, would make a good film that also could serve as a springboard to chronicle the larger effort of the long fight for the Americans with Disabilities Act, which finally became law in 1990, especially now on its 30th anniversary. He went to Nicole Newnham, a News & Documentary Emmy-winning filmmaker he admired and had worked with and thought would be perfect to direct it. She liked what she saw but felt he should co-direct it with her, and soon the film was in motion.

Using about 40 minutes of vintage raw, black-and-white cinéma vérité footage of the campers circa early ’70s and interspersing interviews with many of them now 50 years later, the message of this film comes through loud and clear as all of them refuse to let a disability get in the way of their own hopes and dreams. They are presented as key to helping birth a much bigger movement, and that becomes the thrust of the film’s second half as many of LeBrecht’s fellow campers are among those participating in the effort to change their world. That includes a detailed look at the 504 Sit-in at a federal building that lasted 26 days in 1977. It also includes the fight against the political machinations that were trying to block passage of what would eventually become the Disabilities Act. The film also shows some shocking footage of treatment of disabled people at Willowbrook State School that caused an uproar after a network news special uncovered major abuse.

Primarily, though, this is a movie that celebrates the human spirit, no matter what curveballs life might have thrown at you. To say it is inspiring is an understatement, but this ragtag collection of campers and activists isn’t looking for sympathy. One of them is just worried she will always be a virgin and takes action to make sure that isn’t the case! It’s that kind of movie, folks. The interviews with the likes of Denise, Lionel, Joe, Neil, Ann and so many are priceless. Particularly articulate in Judy Heumann, a longtime activist for people like her who don’t let disabilities stand in the way of progress.

Crip Camp just started streaming on Netflix. Sara Bolder joined the directors as producers. Barack and Michelle Obama are among the Executive Producers. Check out my video review above with scenes from the movie.

Do you plan to see Crip Camp? Let us know what you think.