Continue to Deadline SKIP AD
You will be redirected back to your article in seconds
Skip to main content
January 22, 2020 12:06pm 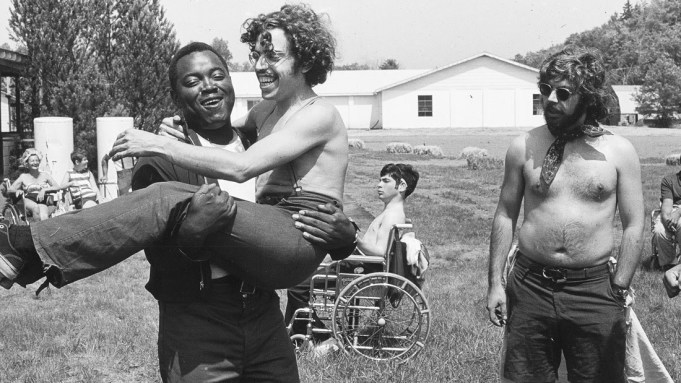 EXCLUSIVE: Check out the first look at Crip Camp, the Netflix documentary that  explores the revolution of an unorthodox summer camp for teenagers with disabilities in the early 1970s that transformed their lives and ignited a landmark movement.

Barack Obama and Michelle Obama, whose Higher Ground production company partnered with Netflix on the Oscar-nominated American Factory, return with their second movie on which they are executive producers. Crip Camp will have its world premiere Thursday as the opening-night film in the U.S. Documentary Competition at the Sundance Film Festival before it hits the streaming service in March.

Higher Ground, which has a deal with Netflix, came on board American Factory after the film premiered at last year’s Sundance, where directors Steven Bognar and Julia Reichert won the directing award for documentary.

As for Crip Camp, Emmy-winning documentarian Nicole Newnham co-directed with sound mixer and former camper James LeBrecht. The pic, which comes the same year as the 30th anniversary of the Americans with Disabilities Act of 1990, draws from archival footage to show how the campers’ bonds endured as they migrated West to Berkeley, CA — a promised land for a growing and diverse disability community — to Camp Jened, where they realized that by working together they might secure life-changing accessibility for millions.

The pic has its world premiere Thursday at 5:30 PM local time at the Eccles and The Ray theaters in Park City.

See the clip above.