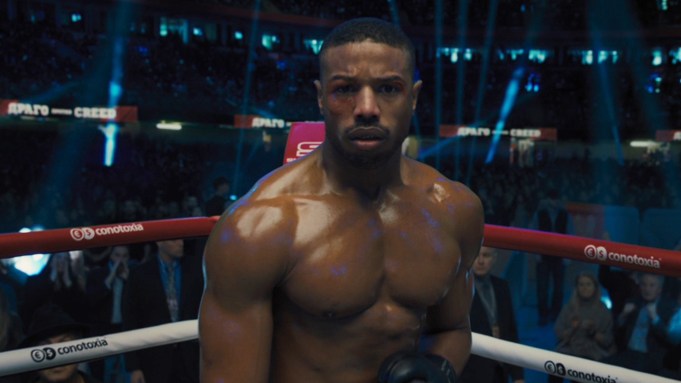 It is not surprising to see Sylvester Stallone’s name on the screenplay credit for Creed II (with co-writer Juel Taylor) because the film follows all the rules of Rocky movies — even if the title character is now named Creed. It’s got all the elements you would expect, particularly the underdog angle (even though Adonis Creed has become world heavyweight champion), the workout montage (this time in the desert), the personal story of marriage and a baby, the bruising fight scenes opposite a fearsome opponent, the inspiring words from the coach in the ring, and most importantly the heart. Stallone has left no stone unturned in the heart department, and his weathered but wise portrayal of Rocky Balboa, now a mentor to young Adonis, the son of Apollo whom he so memorably fought in the ring at the beginning of this series that started in 1976, is as welcome as ever.

This film is the first sequel to the rebooted 2015 Creed, which brought the Rocky saga roaring back to life in a very smart take engineered by Ryan Coogler, who returns with an executive producer credit this time; Steven Caple Jr. takes the directorial reins here instead. Fortunately it has Michael B. Jordan back in the title role as Adonis, facing a major external battle in the ring with Viktor Drago (Florian Munteanu), son of Ivan Drago (Dolph Lundgren, back in a nice return), who fought Apollo in a match that resulted in Apollo’s death in Rocky IV. Of course, later in that film, Rocky would avenge that death by beating Ivan.

Now the revenge match is back on as Adonis, working against the advice of Rocky, is determined to fight Viktor to honor Apollo’s memory. And guess who will wind up in the ring for the big final match? That’s right, Rocky in one corner with Adonis, and Ivan in the other with Viktor.

With Russian-American conflicts still in the news every day, this premise for a sequel is a natural and it works as far as it goes. But when compared to Coogler’s Creed, it all seems a bit too pat and formulaic to be anything other than a nice opportunity to revisit characters we have come to know and love. There’s a bit of predictability to it all, and you can just imagine where it is heading, but Jordan and Stallone make the most of it.

The subplot involving the relationship between Creed and his girlfriend Bianca (Tessa Thompson), an emerging singing star, is heartening and adds a nice touch of personal life flavor to this boxing tale, just as Talia Shire once did for the Rocky movies. Phylicia Rashad is used effectively, again playing Adonis’ mother who also is urging her son, like Rocky does, not to go into the ring with Viktor. There are a couple of fun cameos from other characters you might remember in this saga that never seems to see an end game, and the movie delivers exactly what fans expect.

Stallone was nominated for a supporting Oscar for Creed, the second such Oscar acting nomination he received as Rocky Balboa, and his presence here is much needed. He knows this territory better than anyone, though it’s nice to have Jordan at the center of it all.

Producers are Charles Winkler, David Winkler, Irwin Winkler, Stallone, William Chartoff and Kevin King Templeton. It opens tomorrow from MGM, Warner Bros and New Line Cinema. Check out my video review of the film by clicking the link above.

Do you plan to see Creed II? Let us know what you think.