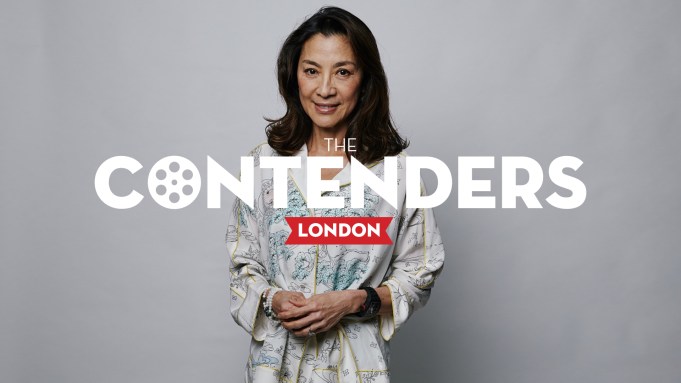 Michelle Yeoh has played numerous roles of over the years, and in Jon M. Chu’s box office smash Crazy Rich Asians, she plays the role of matriarch Eleanor Young, a mother who may look stern and cold, but as we find out in the end, she’s just looking out for what’s best for her son.

During Deadline’s recent The Contenders London awards-season event, Yeoh talked with Deadline’s Joe Utichi about being a “minority” in Hollywood and how Crazy Rich Asians gives a much-needed dose of Asian storytelling to the industry.

To audiences and even her younger co-stars in the Warner Bros smash, Yeoh is an acting legend, appearing in films including Crouching Tiger, Hidden Dragon, Tomorrow Never Dies and Memoirs of a Geisha during a time when there weren’t that many Asian faces on screen. She, in essence, paved the way for them. She said it was wonderful to watch young actors get the opportunity to be part of such a great ensemble.

“We had a good time because everyone was committed and devoted because we saw it as a very rare opportunity that we were all together in a studio movie that was an all-Asian cast,” she said.

The response to the movie from audiences — mainly Asians — has been emotional. Yeoh said that many people have came up to her with tears in their eyes saying “Oh my God, I see myself!” Getting emotional herself, Yeoh said, “It’s about time.”

When Yeoh first came stateside for her career, the idea of representation was new because she was from Asia. “I never felt like a minority,” she said. “I never could understand when I would come to America the first thing someone would say to me is, ‘Oh, you’re a minority.’ “

Yeoh added with a laugh, “When did I become a minority? I just came from China, hello?”

When it came to the industry, she said she didn’t understand the lack of opportunities and roles for Asians. “That’s why you don’t see any Asian actors or actresses getting recognition for what they do because we are not included,” she said. “[Crazy Rich Asians] gave us such a good opportunity.”

With the role of Eleanor, Yeoh was initially upset how the character was adapted from the Kevin Kwan novel. “Eleanor was written as a very nasty, mean — not nice at all,” she points out. “I don’t think Eleanor comes from that motivation. It really comes from the love of her son and the understanding what it takes to be the wife.”

Yeoh said the way Eleanor treats her son Nick’s (Henry Golding) new girlfriend Rachel (Constance Wu) is because of cultural differences, not because she hates her. Rachel is independent and very American and hasn’t learned the traditions of Singapore and China, and she wouldn’t survive there. “In her way, [Eleanor] is scaring her from this journey,” said Yeoh.

Yeoh told Chu that if the film goes down the more mean-spirited mother path she couldn’t do it “because it would be an injustice to all the mothers of the world — that mothers are only mean when they are truly coming from love.”

Chu put her apprehensions to rest when he told her he grew up in a Chinese family lived in a home that honored tradition. She said that he knew all the key points and changed her mind.

“They re-wrote the script with the understanding of what it means to have strength for all the women who were in the movie,” she said.