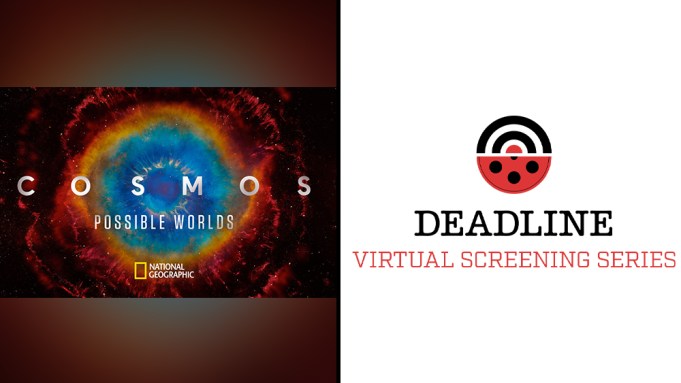 “Maybe this is a shot across our bow,” says Cosmos: Possible Worlds host Neil deGrasse Tyson of the coronavirus pandemic and its affect upon the Earth’s environment, as well as our health. “It’s nature’s warning shot that we need to coordinate to be wiser about how we manage our health care programs, our industries, our employment – all of this together, I’d like to think it won’t be a lost lesson.”

The U.S. National Academy of Sciences award-winning astrophysicist joined me, Possible Worlds executive producer and creator Ann Druyan and the National Geographic series’ Visual Effects Supervisor Jeffrey A. Okun for a spirited online panel earlier this week. Our shindig on science, space and the almost unprecedented times we are living in was preceded by a screening of the penultimate “Coming of Age in the Anthropocene” episode of this season of Possible Worlds – as you can see in the video above.

Having debuted on March 9 on Nat Geo, the 13-episode Druyan and Brannon Braga written and directed Cosmos: Possible Worlds focuses on the optimistic aims of science and discovery for a hopeful tomorrow.  The series is, of course, a follow up to the Peabody Award and Emmy winning two seasons of Cosmos: A Spacetime Odyssey. That show was  a sequel of sorts to the legendary Cosmos: A Personal Voyage series hosted by Carl Sagan nearly 40 years ago.

A longtime collaborator with astronomer Sagan, as well as his spouse, Druyan was also the Creative Director of NASA’s Voyager Interstellar Message Project and a co-creator of the original Cosmos. A self-described “failed scientist,” Okun has been the visual effects supervisor on the likes of Stargate and 2017 feature Geostorm. The industry vet has also been the recipient of the Visual Effects Society Founder’s Award.

Needless to say, some pretty heavy hitters and a great panel as you can see by clicking on the video above. And thank you to everyone who tuned in on April 20 and for all the great questions that you submitted.