Continue to Deadline SKIP AD
You will be redirected back to your article in seconds
Skip to main content
April 24, 2018 2:43pm 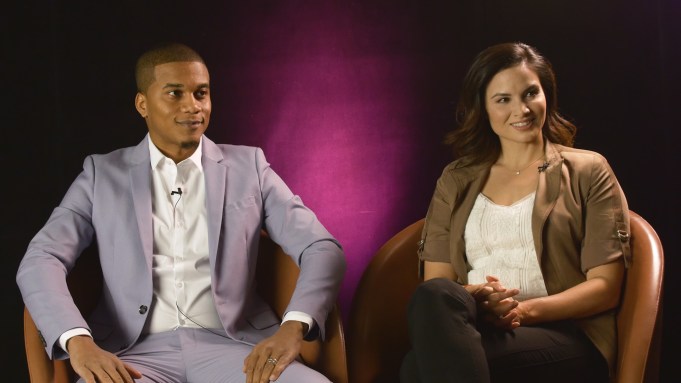 “I think when you have a format that’s only 10 episodes, and you know that you don’t have a studio or a network basically dictating what you can or cannot do, it leaves a lot of freedom to explore different realms,” says Katrina Law about Sony Crackle’s original series The Oath, adding, “It’s interesting that people are really gravitating to this because they do want to see something that is outside the box and not normally what’s tackled on network television … I don’t think a normal television show would tackle something this slice-of-life.”

Law and her fellow Oath star Cory Hardrict recently sat down for an episode of Deadline’s Next Generation TV video series to talk about their crime drama, which was just renewed for a second season on the streaming service. Sony Crackle says it is the platform’s most-watched new original series ever. Created and showrun Hawaii Five-0′s Joe Halpin (a former Los Angeles County Sheriff’s deputy in South Los Angeles) and executive produced by Curtis “50 Cent” Jackson, it explores a world of gangs made up by a secret society of corrupt cops, and those that are out to stop them.

Said Hardrict, who knows about grit in two stints with Clint Eastwood (American Sniper and Gran Torino): “It felt like 10 gritty independent films and it was real, and it was something really dangerous, and it had a family element to it — everything I ever dreamed of in a TV show was right there, and I said sign me up.”

Check out our conversation above in which the pair also discuss 50 Cent as a producer, working with Sean Bean and how family and love are at the root of the series.