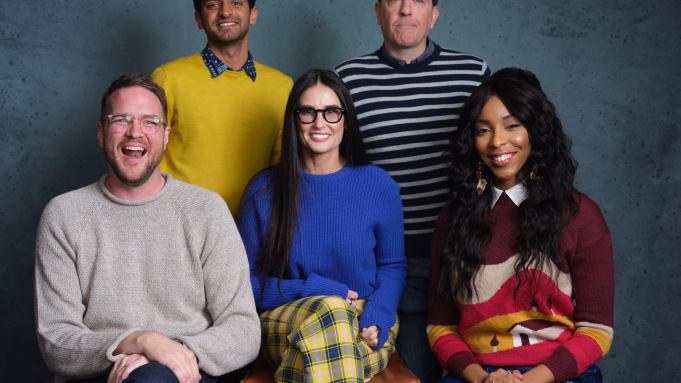 In Patrick Brice’s Corporate Animals, Demi Moore relished the opportunity to play “the Trump of the movie.”

In the comedic horror pic written by Peep Show‘s Sam Bain, Moore’s terrible CEO leads her suffering assistants on a corporate team-building retreat. During a caving weekend in New Mexico spearheaded by Bear Grylls stand-in Brandon (Ed Helms), disaster strikes, leaving the bunch trapped underground. As claustrophobia hits, the group must unite in an effort to survive, even as the veils of corporate deference and social courtesy come down.

Approached for the film, Moore had seen Brice’s critically-acclaimed Sundance pic The Overnight, and was ready to try her hand at a kind of character she’d never done. “She’s self-centered, narcissistic, but I think somewhat well-meaning,” Moore explained, appearing at Deadline’s Sundance Studio. “It was just kind of a great opportunity I couldn’t pass up, and I knew it would be a really fun character to explore.”

Initially sent “a one-page outline for a movie idea written by Sam Bain,” Brice was a huge Peep Show fan and would have signed on immediately, even if that page had been blank. In the script itself, co-star Karan Soni responded to unusual character arcs, for those who “go through a pretty crazy life situation” and quickly show sides of themselves that no one knows. For Jessica Williams, there was excitement in the prospect of “a real ensemble piece,” featuring an array of “really amazing actors.”

Producing the pic, in which he also stars, Helms was gratified just by watching the film develop over time. “From a producing standpoint, you’re always sort of cultivating a lot of things and hoping something clicks,” he said, “and this thing just clicked so beautifully.”

Appealing as a producer, Corporate Animals spoke equally to Helms as an actor. “Of course, I got to do what I think everyone expects from me, which is to be…a grizzly badass,” the actor deadpanned. “That’s really my wheelhouse, and I got to live in it in this movie.”

To view our conversation with the director and stars of Corporate Animals, take a look above.