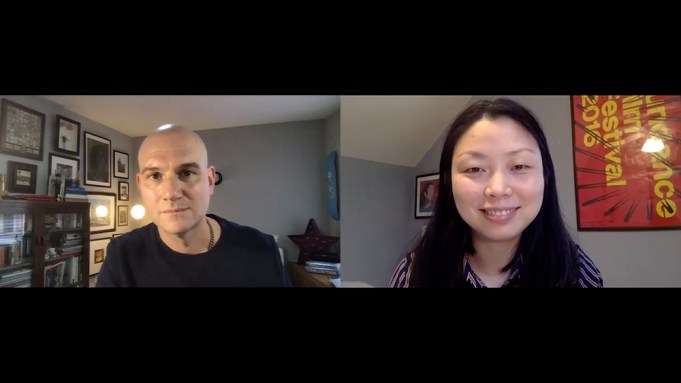 “I went to China in January and left my son there with my family, so he could spend the New Year, the Chinese New Year with them,” reveals In The Same Breath director Nanfu Wang of the very personal connection she had to the outbreak of the coronavirus in early 2020.

“Then I came back to the U.S. and I landed in Utah on January 23, the same day the Wuhan lockdown happened,” the Sundance Film Festival veteran adds of the entwinement the Robert Redford founded fest has with her latest documentary and the pandemic that has changed everything.

Two years after her film One Child Nation was a Grand Jury Prize Winner at Sundance, Wang is back this SFF with an examination of the censored rise of Covid-19 in China literally 12 months ago, and its terrible toll and path around the world. With In The Same Breath set to debut on the opening night of the semi-virtual Sundance tonight at 5 PM PST, Wang sat down with me in our virtual studio to discuss the film and its revelations – as you can see in the video above.

Shot very up-close and personal with dozens of cameras and freelancers in the emergency wards, ambulances and dark heart of the crisis in Wuhan and all over the People’s Republic, In The Same Breath brings a damning critical perspective on misinformation and incompetence not only in China, but here in America too.

“I think the people in the two countries tend to believe that we are very different,” Wang said of competing superpowers the PRC and the USA. “What I witnessed and I hope that the film can conveys is how the authority has shaped the narrative of China’s response to the pandemic,” she notes of the propaganda machine at work literally from New Year’s Day 2020 when the first rumors of a new virus started to spread – as you can see in a harrowing clip from In The Same Breath below:

“People in China had now formed this memory of this is how it happened and this is how China handled it. And this memory …is more so shaped by the information they consumed, TV, newspaper and social media, the information that was allowed to be presented to them, So, what really struck me is I felt I had seen seeing the history being written in real time, and this is he very of the history that the Chinese people will remember,” Wang notes.

Yet, with almost 430,000 deaths from Covid-19 so far, and nearly 26 million confirmed cases here in America, an attempt at an official narrative was not unique to China, Wang states in the film and in our interview.

“The more I saw what happened in the US, I had more questions, she says. “I would say it was my political awakening moment of seeing the US in a new way that I never did.”

In The Same Breath is screening online at the semi-virtual Sundance today and on January 30. The film will debut on HBO later this year.