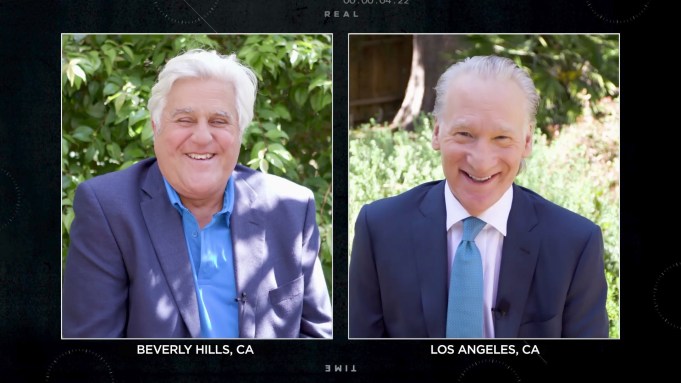 Jay Leno and Bill Maher got very up close and personal tonight on HBO, figuratively and literally.

While not crossing any social distancing orders in this time of coronavirus lockdown, the ex-Tonight Show host and the Real Time with Bill Maher front man were within waving range in their well-heeled neighborhoods tonight – as you can see in the video above.

“Bill, I’m in your backyard,” Leno yells out at Maher after the two had told some COVID-19 face gear miscommunication jokes, lamented lost lucrative gigs on the road, and Leno’s efforts to provide masks to first responders via his 3D printers “Behind you, turn around,” Leno bellowed after a set up that positively groaned in its obviousness.

“Gotta keep six feet apart,” Leno yelled out as he strolled out of camera in the interview filmed yesterday.

“I don’t want to give away where you live exactly, because there’s crazy people out there,” Maher teased earlier of where his pal was remotely chatting to him from on the split screen. “But I think people know you’re a very successful guy, so let’s just say somewhere in the Southern California area where the very rich people live. I live in a similar kind of neighborhood,” Maher noted, to be cut off by “yeah, about a mile away” from a laughing Leno. It should be pointed out that the lower third under Leno said he was in Beverly Hills, while Maher was in L.A. itself.

Of course, interrupted by what sounded like a cell phone ring and a truck drowning out one of his gags, Leno seemed to give their location away by yelling out at the driver as he was “trying to do a show in Bill’s backyard.” As the greatly amused Maher swayed with laughter, Leno threw in there “when you live on Van Nuys Boulevard, that’s what you get.”

And what we got, with some asides about what a “horrible thing” the health crisis is and “the good side” of the environment appearing cleaner with so few cars and trucks on the road, was a love-in.

Mocking Americans binge watching TV during the pandemic and getting fatter in “the only crisis where you can see celebrities telling you not to panic from their panic rooms,” to quote Maher, the duo were in sync in a manner you only see on primetime talk shows when Dennis Miller shows up on Sean Hannity’s Fox News show for a mutual gripe session – which is to say, it was a bromance only missing a high five or chest bump to seal the deal.

Which meant there was a lot of two self-satisfied and rich white guys slagging other rich folk. Plus, the two yukked it up over “gay bars having ladies’ night” and Nation of Islam leader Louis Farrakhan “wearing a clip-on bow tie” as examples of how bad the economy is doing right now.

Also, to big laughs from Maher, Leno took swings at the judicially challenged ex-Empire star Jussie Smollett and indicted ex-Fuller House actress Lori Loughlin tonight. The former had two guys “beat him up on Facetime,” said the host of CNBC’s Jay Leno’s Garage. The latter, who is fighting to stop having to face trial in the college bribery scandal. “paid an official to get her daughter into medical school, because they wanted to be prepared.”

Starting out Real Time with his usual schtick of stoner jokes and grumpy old man routines, stay-at-homer Maher once again opened tonight’s show from his backyard. Though considerably more spruced up from his initial return to HBO on April 3, the monologue was punctuated by a crowd and a laugh track drawn literally from decades ago.

“Trump, yes he’s having a bad week,” Maher declared of his long time POTUS foil and his flailing response to the COVID-19 crisis. “Never take medical advice from a fat guy in clown make-up,” the Real Time front man added of the former Celebrity Apprentice host and his constant and disproved alternative vaccine pronouncements.

Then Maher had House Speaker Nancy Pelosi as his first guest in an interview also filmed on April 23.

“Is there anyway Congress can pass their own plan?” Maher asked the Speaker in the first of his self-described “many questions” for the most powerful Democrat in the nation. Pelosi explained to the late-night host that the latest coronavirus relief package passed yesterday has $25 billion in it for testing and “requires there be a national strategic plan for testing.”

“The national debt is one thing,” Maher told Pelosi in their policy heavy exchange that focused mainly on the vast amounts of “funny money, to quote the host, being spent and what it will really do in the end. “I’m worried about the whole thing collapsing and we go into a Depression,” Maher added.

“It’s a matter of life and death …this is more an investment in the lives and the livelihood of the American people,” Pelosi countered, noting that “other options” may be required down the line, especially if the coronavirus strikes America hard come the fall. “We have to think big about that. The more we invest in science and health, the quicker our economy will recover from the pandemic. We expect a return on this money …that’s stimulus.”

Interestingly, coming off Maher’s opening tonight, Trump was barely mentioned in the conversation with Pelosi and her talking points. However, no surprise, both the Speaker and the Trump-hating Maher agreed that the Democrats needed to win the election in November.

The chat with the woman third in line to the Oval Office was followed by a chat with op-ed penning Dr. David L. Katz, president of the True Health Initiative and then a segment from Bill’s in-house bar on post-pandemic pick-up lines.

By the time it came to the New Rules segment of the show, it was a throwback to how the characters from Seinfeld would handle coronavirus and Netflix’s Tiger King that was the butt of Maher’s snark. “Stop trying to get me to watch Tiger King,” the host said of the docuseries blockbuster about murder, betrayal and big cats. “I already have to watch one bottle-blonde from reality TV. And the other reason I’m not watching Tiger King is that torturing animals is what got us into this mess.”

Well, talk about saving the best for last and nailing it on animal abuse and its “six degrees of tainted bacon” fallout … as you can see below.