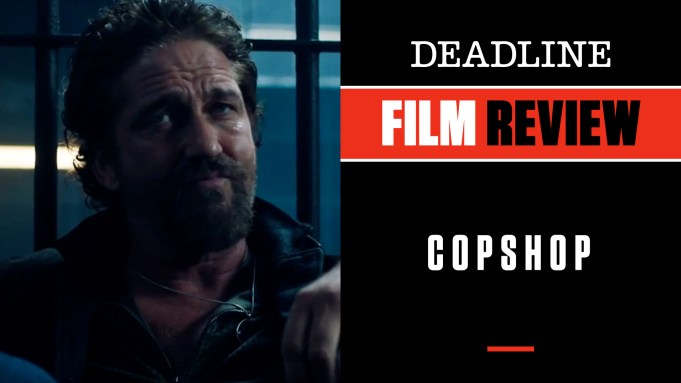 In the midst of the fall festival season when studios roll out their most prestigious Oscar contenders, why not take a timeout from all that serious stuff, sit back and watch director-writer Joe Carnahan take us on a tightfisted, machismo-infused, ultraviolent B-movie ride?

Since the heydays of primo movie bad guys James Cagney, Edward G. Robinson and others who ruled the ’30s and ’40s gangster flicks, Hollywood always can bet on ruthless, far-from-morally upstanding characters to provide a good time at the movies. In that tradition, Carnahan has gathered Gerard Butler, Frank Grillo and Toby Huss, among others, to prove they are more than up to the task of this genre, ratcheting up the level of violence and bringing it home for action fans. The big difference here — and it is a big one — is that the real star at the center of this is a Black female rookie cop who takes them all on and proves she might have a higher level of testosterone than all of them. She is played by Alexis Louder, and you should remember that name because she is going to be a star.

Shot at the height of Covid shutdowns, Copshop on the surface is the perfect kind of action enterprise since it largely takes place near Reno in a police precinct and the jailhouse within that space. But it starts off with a wild chase in which con man Teddy Murretto (Grillo) is evading a menacing assassin tailing him. Taking the nearest offramp, he rolls his Crown Vic to a Reno casino, gets out and decks a rookie police officer, Valerie Young (Louder), and lands himself in what he perceives to be a safe house, namely the jail house at the station.

Unfortunately for him, the hitman on his tail, Bob Viddick (Butler), is very inventive and pulls off a DUI arrest that lands him in the cell with a drunk guy named Brad (Marshall Cook) as company. Coincidentally — or not — it is the cell right next to his prey, Murretto. Handcuffed to a cell bar, this sets off a confrontation, loaded with biting dialogue for the most part between these two adversaries. (Kurt McLeod joined Carnahan on the screenplay credit, with story by Mark Williams). Trying to keep the peace is the precinct sergeant Mitchell (Chad L. Coleman), who puts his rookie Young right in the middle of the whole thing in order to do that.

If you know this genre, of course all hell eventually is going to break loose, and Viddick finds a clever way to expedite that in using his cellmate to access Sarge’s gun. Meanwhile, though, right through the station’s front doors comes a birthday balloon delivery — but it doesn’t take long to see this is no ordinary delivery as it comes from Anthony Lamb (Huss), yet another assassin after Murretto, but this guy is a true loony psychopath if ever there was one. Dancing around and shooting up the place like the Joker on steroids, Lamb eliminates many of the officers as he works his way toward the main players. Suffice it to say the showdown has just begun, with Young needing to prove her worth in an aspect of the new job she never counted on.

In a funny way, much of this plays like it could be on stage, with Carnahan smartly letting the tension build and depending on words, not actions, for the film’s first half. The characters, good and bad, are keenly developed so that when the fireworks begin, we are well versed in this very dark universe. The casting could not be better. Butler has with his recent slew of movies — Olympus Has Fallen and the rest of that franchise, Greenland, Geostorm and others — proved to be an adept action star, but this time he gets to be a guy with no moral compass except to kill and it fits him well. Grillo, who has the perfect face for a guy like Murretto who has always skated out of trouble, is the perfect foil and he gets a lot of mileage of his shoulder-length hairstyle. At one point Lamb comments on his “man bunm” saying, “You look like Tom Cruise in that samurai movie nobody watched.” It’s lines like this that make Copshop crackle, and Huss has his fair share of them in a go-for-broke nutso performance that places Anthony Lamb in the top tier of current cinematic psychotics.

In supporting turns both Coleman and Ryan O’Nan stand out, the latter quite effective as a police officer turning to the dark side and going way over his head. But it is Louder who steals the show and at least gives us one person to root for in this Dante’s Inferno environment that’ll perhaps remind you even in part of Cagney at his bad-boy best in the finale of White Heat. Carnahan, employing an unlimited level of violence, has done right by the genre in this highly entertaining sleeper.

Open Road releases the film Friday exclusively theaters. I waited until last night to see it in a theater, and you should too. Check out my video review at the link above with scenes from the film. Do you plan to see Copshop? Let us know what you think.