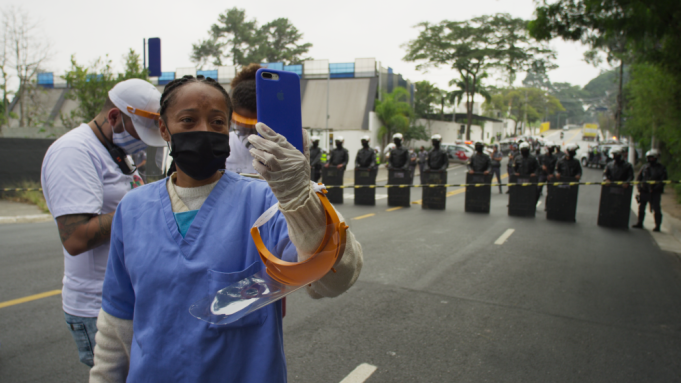 EXCLUSIVE: As of this morning, 4,743,708 people across the globe have lost their lives to Covid-19, according to the World Health Organization.

Those numbers take on a human face in the new documentary Convergence: Courage in a Crisis, from Oscar-winning director Orlando von Einsiedel (The White Helments, Virgunga). The film, premiering on Netflix October 12, not only captures the scale of the pandemic, but what some people around the world have done—quietly and heroically—to mitigate the impact of Covid-19 and respond to the disproportionate way the virus has affected the poor, disenfranchised and especially people of color.

The British filmmaker worked with co-directors in the U.S., China, Brazil, Iran and other countries to craft the story. Von Einsiedel tells Deadline the project originated just as the pandemic was accelerating into a worldwide disaster, in April 2020.

“If you watched the news [then] there was a relentless stream of negative and upsetting happenings playing out globally became of the pandemic—people getting sick but also crackdowns on freedoms, greed, lies, opportunism and inter country disputes,” von Einsiedel notes. “However, overwhelmingly what I was witnessing in my own community, and on social media were people doing positive things; volunteering to help those less fortunate, caring for vulnerable individuals, helping health care workers, and other acts of altruism and love.”

Von Einsiedel adds, “The film grew out of this. We wanted to follow everyday people across the world responding to the crisis. A sort of global love letter to humanity.”

Convergence will debut theatrically on October 8 in New York at IFC, Los Angeles at Laemmle Monica and San Francisco at Landmark Shattuck. The film follows nine individual stories, one of them focusing on a remarkable physician in Miami, Dr. Armen Henderson, who divides his time treating the sick in the hospital and volunteering to help the homeless deal with the threat of Covid-19. He also has become a leading activist in his community, combatting preexisting inequities that have become even more stark and dangerous as a result of the coronavirus.

“Covid-19 exacerbated all the bad things about America,” Dr. Henderson remarks in the film. “We’re seeing the unmasking of neglect of these communities now be exacerbated by this crisis.”

Convergence also follows a selfless volunteer in China risking his life to transport medical workers to hospitals, and a Syrian refugee in the U.K. taking similar risks to clean hospital wards in London. There are extended sequences shot in Tehran, Delhi, and the poverty-stricken favelas of São Paulo.

“I found this to be one of the hardest films I’ve ever worked on,” von Einsiedel tells Deadline. “There was a perfect storm of challenges that made everything incredibly tough. The safety and security of our team, and the people they were filming, was a continuous stress and worry… The logistics of working remotely across various time zones, in different languages, with numerous shoots happening simultaneously across the world on any given day was a unique experience for everyone involved.”

The film, and trailer, features the original song “Beautiful Life,” from Grammy-nominated singer-songwriter Michael Kiwanuka. Convergence: Courage in a Crisis is a production of Grain Media and Story Syndicate.