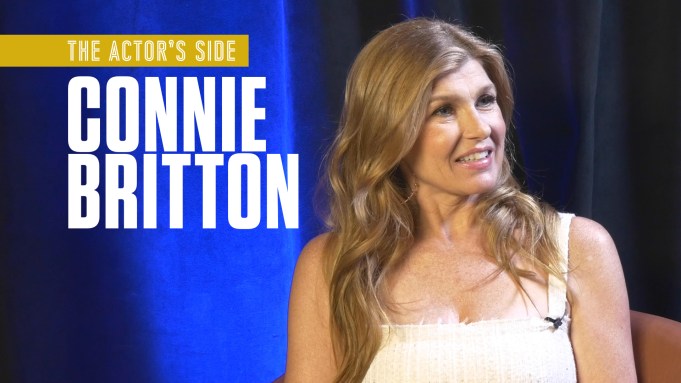 So far this year, Connie Britton has received Golden Globe and Critics’ Choice nominations for her role as Debra in the limited series Dirty John, and there is Emmy buzz for the performance as well. Britton is no stranger to that, though. A veteran of several series, she has been Emmy-nominated in three of them: Friday Night Lights, American Horror Story and Nashville. Not bad for a star who knows how to pick ’em, as they say, especially when you consider other iconic shows of which she has been a part including 24, The West Wing and her first big series Spin City opposite Michael J. Fox.

When Britton came to our Deadline studios for this week’s episode of my video series The Actor’s Side, I asked what was the secret behind the strong track record she has in TV and how she decides to do a show. Risk, as she says, is a big part of it. That included taking on country singer Rayna James in Nashville, and it also includes Dirty John, a true and somewhat frightening limited series that started as a podcast. She plays the female lead of Debra, a woman caught up in a romantic relationship and marriage that turns into a nightmare when the husband (Eric Bana) isn’t exactly all he is cracked up to be.

We talk about taking a podcast and turning it into a TV thriller, and that responsibility when you play someone still alive, as she did in Dirty John — that risk.

At the same time, Britton has returned to one of her Emmy-nominated roles, Vivien Harmon, in this season’s American Horror Story: Apolcalypse, the first AHS edition in which stars return from a previous season playing the same role (that is why AHS has been switched from Emmy eligibility for Limited Series to Drama Series). Whatever the category, Britton tells me it was fun to come back, especially under the direction of co-star Sarah Paulson.

Britton can also be seen on the big screen currently in Mustang, as well as the upcoming Jay Roach-directed Roger Ailes movie coming out at Christmas.

Check out our conversation in the video above. To see past episodes of The Actor’s Side, click here.