Continue to Deadline SKIP AD
You will be redirected back to your article in seconds
Skip to main content
March 3, 2020 8:29am
1Comments 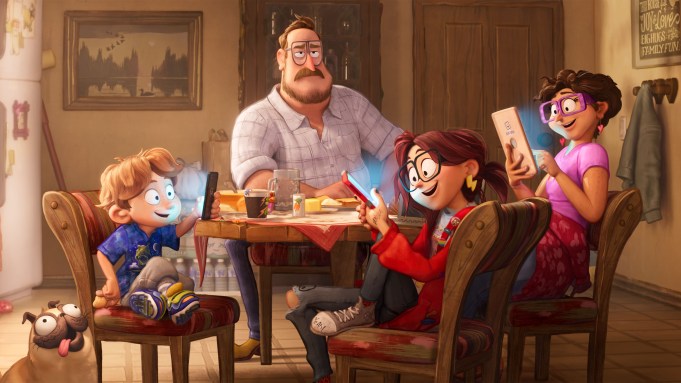 Sony Pictures Animation on Tuesday released the first trailer for Connected, the team-up produced by the studio’s Oscar-winning Spider-Man: Into the Spider-Verse duo of Phil Lord and Christopher Miller, and Mike Rianda, known for his work on Gravity Falls. The pic hits theaters on September 18, 2020.

With a definite nod to Spider-Verse‘s groundbreaking animation techniques, Connected pops onto the screen in telling the story of an everyday family’s struggle to relate while technology first disconnects them from one another in their daily lives, then rises up to take over the world.

It all starts when Katie Mitchell (Abbi Jacobson) is accepted into the film school of her dreams, and her ature-loving dad Rick (Danny McBride) deciddes the whole family should drive Katie to school together and bond as a family one last time. Joined by mom Linda (Maya Rudolph), little brother Aaron (Rianda) and their pug Monchi, their plans are interrupted by a tech uprising as the electronic devices people love decide it’s time to take over.

The pic, which also features the voices of Eric Andre and Olivia Colman, is co-directed by Jeff Rowe, who co-wrote the script with Rianda. Lord, Miller and Kurt Albrecht are producing, with Will Allegra and Louis Koo executive producers. Columbia Pictures is releasing.

Sony Animation, which had originally titled the movie The Mitchells vs. The Machines, also has upcoming next year Vivo, the studio’s first musical featuring original songs from Lin-Manuel Miranda.