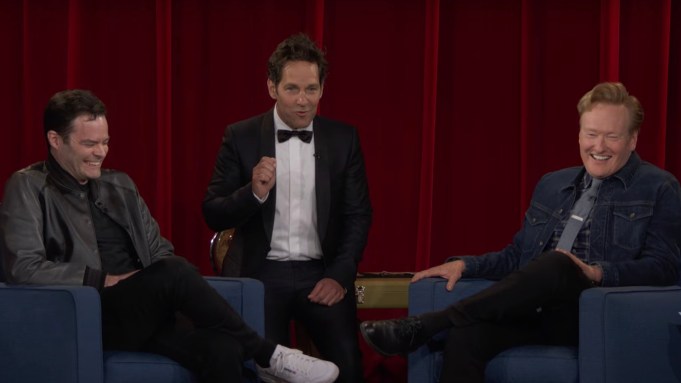 Paul Rudd couldn’t let Conan O’Brien leave TBS without a parting gift, and anyone who has watched his appearances on the late-night talker couldn’t be surprised with his choice: A clip from the awful 1988 film Mac and Me.

Longtime watchers of O’Brien already know that Rudd has been pulling the same bait-and-switch panks for decades: After he introduces a clip from his latest film, a bizarre bit of footage from E.T.-rip-off Mac and Me pops up, featuring a boy in a wheelchair plummeting full-speed down a hill and off a cliff into a lake. (The kid is saved by an E.T. lookalike).

Rudd’s prank last night was, if possible, a bit more elaborate than usual, and recruited Conan guest Bill Hader, who was telling O’Brien about the worst sketch he ever wrote for Saturday Night Live, a sketch that allegedly co-starred Rudd. A tuxedoed Rudd then crashed the interview, disputing Hader’s interpretation and offering to show a never-aired clip of the sketch’s dress rehearsal.

You can guess the rest.

“It’s been like 25 years of you coming on the show,” said O’Brien. “Every time, for years, I would be convinced that I would see the real clip because you are such a genuinely nice person…and then you pull that sh*t every time.”

Rudd said he began the tradition because he felt showing actual clips to “sell your wares” seemed “so artificial.” He also revealed that he’d initially considered showing a clip from the film Baby Geniuses but instead chose Mac and Me.

Then Rudd offers to show a clip from Baby Geniuses…

Watch the segment above.