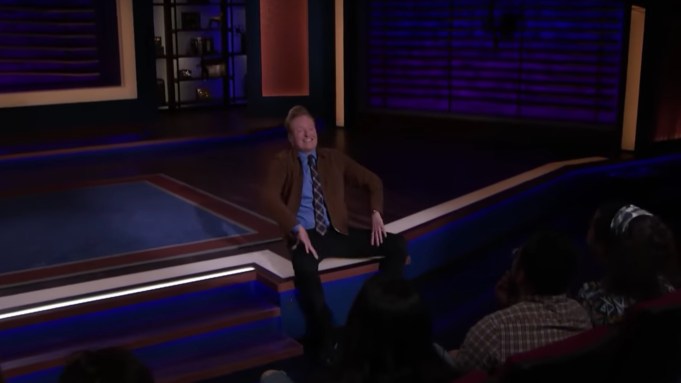 Calling Conan O’Brien his “comedy hero,” Kumail Nanjiani says he was “truly mortified” watching last night’s Conan episode – an episode that Nanjiani was supposed to be on.

“@ConanOBrien is my comedy hero,” Nanjiani tweeted today. “Him and @AndyRichter are the reason I started comedy. So this clip is something I would love if it was about anybody other than me. But it’s about me, so I’m truly mortified.”

Nanjiani canceled his guest spot at the last minute due to an unexpected conflict with his Silicon Valley taping. O’Brien’s recently installed one-guest-per-episode policy was bound to backfire sooner or later, and last night was the night: With Nanjiani out, O’Brien was left with the entire half-hour of the TBS talker to fill. Fortunately, O’Brien’s assistant of 10 years is a terrific sport.

After an opening monologue explaining the situation – and showing a clip from a movie that most definitely is not the one Nanjiani was going to plug – O’Brien interviewed Sona Movsesian, his personal assistant of 10 years. Movsesian shared her initial thoughts on being asked to sub for Nanjiani: “Oh sh*t, they really ran out of stuff to do.”

Watch the interview above, and O’Brien’s monologue below.

If she had stage fright, Movsesian didn’t show it. Asked whether she liked working for O’Brien, she said “Well, it’s been over 10 years so obviously I like it, but at times I want to poison your food.”

All in all, Team Coco took the no-show pretty well. “We love him, he’s a great guy, very funny man,” said O’Brien about Nanjiani, though the host laughed when Richter called the Silicon Valley star “Kumail Nan-showy-uppi.”

. @ConanOBrien is my comedy hero. Him and @AndyRichter are the reason I started comedy. So this clip is something I would love if it was about anybody other than me. But it’s about me, so I’m truly mortified. https://t.co/JXxtyUxkUG

O’Brien explained that the show’s old 60-minute format made last-minute cancellations easy – the guest of the second segment was just moved into the top slot. He could remember only one other no-show in Conan history: Liza Minnelli in 1996. O’Brien joked that Nanjiani has now entered the show’s ranks of “troublesome divas.”

O’Brien said Nanjiani was shooting HBO’s Silicon Valley in Marina del Rey and that a “snafu” in the shooting schedule had prompted the last-minute cancellation.

Nanjiani had been booked on the talk show to promote Stuber, a buddy comedy with Dave Bautista (opening this weekend, the movie has been savaged by critics, currently holding a 45 Rotten Tomatoes score).

“We had a clip all loaded up,” O’Brien said, “but if a guy doesn’t show up we’re not going to show a clip promoting his movie. You gotta show up to get the cookie.”

But Conan did indeed show a clip – for another “little movie” opening soon: Disney’s The Lion King.