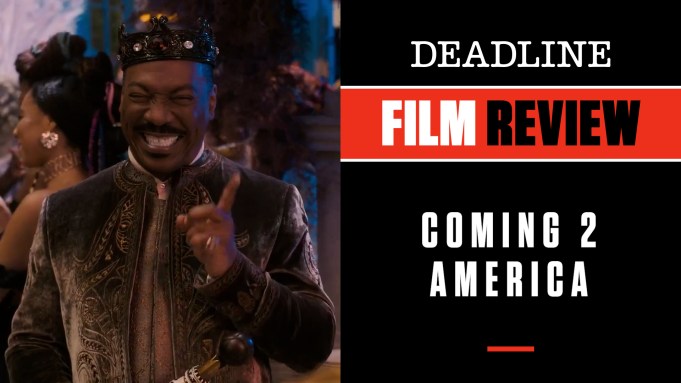 It is hard to believe it has been 33 years since Eddie Murphy played one of his most endearing characters, Prince Akeem of Zamunda, in 1988’s comedy hit, Coming to America. Why it has taken that long for a sequel I am not sure, but I can say after seeing Coming 2 America that they have matched the first not only for laughs but also heart and just pure fun.

The premise that brings Murphy and buddy Arsenio Hall back, taking them from Zamunda to Queens and back again, is a natural that perfectly incorporates the three-decade-plus period since last we met them. Murphy’s prince is about to become King Akeem with the imminent death of King Joffer (James Earl Jones, returning in his original role), but not before it suddenly is learned that Akeem has a 30-year-old bastard son from a one-night encounter with baby mama Mary (a riotous Leslie Jones) during that last fabled visit to America, when he met his true love, now Queen Lisa (Shari Headley). With three daughters with Lisa, the eldest Meeka (Kiki Layne) was rightfully heir apparent, but now in his dying moments, King Joffer says the firstborn male would be the one to ascend to the throne.

Enter Lavelle Junson (Jermaine Fowler), and the reason King Akeem and his faithful sidekick Semmi (Hall) head back to Queens: to bring the would-be prince to Zamunda to take a test in order to get the royal title. Insisting on bringing mom Mary along, the pair suddenly are fish out of water in the regal surroundings of their new royal family connections — and there are some very funny bits in that regard, particularly with Jones, who steals every scene she is in. Things are complicated by the rivalry of neighboring country dictator General Izzy (Wesley Snipes) of Nexdoria, who had demanded that Meeka be married off to his son in order to bring the families together and get a taste of power. But with Lavelle making that moot, he now brings daughter Bopoto (Teyana Taylor) into the picture as the would-be wife for a Prince Lavelle. Problem is, Lavelle is falling in love with his appointed Zamundian hairdresser Mirembe (Noomzamo Mbatha in a sweet turn), a woman with a mind of her own. All of this is weaved nicely in and out by screenwriters Barry Blaustein & David Sheffield and Kenya Barris, along with director Craig Brewer, who keeps it all humming in a swift comedic pace without ever going over the top or suffering from sequelitis.

And rest assured, the many different guises of those barbershop characters are back, with Murphy again taking on Clarence and Saul and Hall taking on Morris. Hall also reprises his infamous Rev Brown, and of course Murphy does a very funny musical take again with Randy Watson and “Sexual Chocolate.” Original cast members are aplently with brief returns from John Amos as Cleo McDowell, now owner of McDowell’s hamburgers (obviously a McDonald’s clone), and his employee Maurice (Louie Anderson), now promoted.

There are plenty of other familiar faces, along with new. Fowler is a great choice to play Lavelle, Tracy Morgan gets some laughs joining the cast, and even Murphy’s daughter Bella Murphy joins the proceedings as Omma, second daughter of King Akeem. Snipes, like Jones, are total scene-stealers, but ultimately this all belongs to Murphy and Hall, and it’s great to have them back in the royal court, one that brings welcome diversity to the crown. This is a good time at the movies.

Kevin Misher is producer. Paramount made the film but handed it off to Amazon due to the pandemic, and it begins streaming Friday. Check out my video review with scenes from the film at the link above.

Do you plan to see Coming 2 America? Let us know what you think.