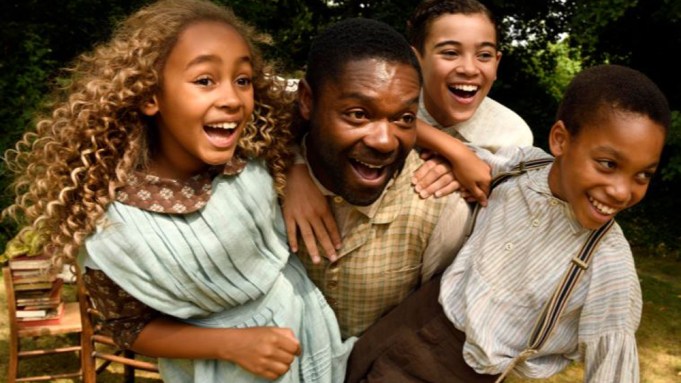 Above is an exclusive clip of Come Away, a fable that premiered today in the Kids section and figures to be a sought after acquisition title in the Sundance Film Festival. Directed in her live action debut by Oscar-winning animation superstar Brenda Chapman, the film stars David Oyelowo and Angelina Jolie. While Oyelowo is unable to be in Sundance because he is in London shooting for Netflix the George Clooney-directed adaptation of Good Morning Midnight, he ducked Clooney for a moment between takes to tell Deadline why the film means so much to him, and how he cleverly got Jolie to take the leap with him as they play parents of children who respond to a family tragedy by becoming Peter Pan and Alice in Wonderland, fusing elements from both places into the narrative.

DEADLINE: Why this film?

OYELOWO: Audiences always gravitate to the familiar, that’s coming at them in a fresh way. Like having Peter Pan and Alice from Alice in Wonderland and the world of Neverland and Wonderland combined in a way that is both grounded and yet feels fantastical. And also the fact they approached me to play the father of both Alice and Peter, which means you are getting to see it in a different way than you’ve seen before, with a different kind of Alice and a different kind of Peter. Fresh, though familiar. Having four children myself, I have watched how sophisticated they are in relation to how they deal with grief, the difficult sides of life, and how they use their imaginations not just for play but as a coping mechanism. Marissa Kate Goodhill’s script did such a good job of capturing that.

That’s how Angie’s involvement came about. We’ve been friends for a long time, not really because we had worked together as actors, but because we share this thing of having lots of children. I have four and she has six, and we’ve had moments where our kids have gotten together and it’s something with ten kids running around. We’ve also had conversations about being a good parent while being a busy parent and how we cope and how our kids cope in what at times are rarfied circumstances. Angie would see me do independent films over the years and after one in particular, Nightingale, which she saw and liked, she told me, ‘my goodness, I just never get offered anything like that.’ And I said, ‘shut up. That’s not true!’ She said, ‘no one ever comes to me with that kind of film.’ So when Come Away came my way, I thought, I’m going to call her bluff. I said, ‘I’ve got one for you, and not only is it an independent film, you get to play a mother, which you say you never get to play on screen.’ To be fair, within four days she was on board.

DEADLINE: What most surprised you when you saw the finished film?

OYELOWO: The thing I was most taken by and the thing that made me gravitate toward Brenda as a filmmaker, is the fact she just refused to patronize the children’s side of the story. Sometimes with movies that have fantasy and kids in it, you can play down to them, as opposed to meeting them where they’re at. It’s like when you see a kid and start talking to them in baby speak, and they look back at you with a look that says, what is wrong with that person? Brenda never does that with her stories, whether it be Lion King, or Prince of Egypt or Brave. And that was the case with this. She deals with grief head on, in relationship to these kids. They are both allowed to be kids while also having to deal with genuinely difficult stuff that even grownups struggle with. That’s a tough balance to strike and she has done it impressively well.

DEADLINE: Is it a film you and she can show your children?

OYELOWO: I’ve shown it to my children, who range from 8-18. I think they are in the sweet spot for the film. There is the nostalgia for Alice in Wonderland and Peter Pan for grownup, I think. I’ve watched with my kids and what I’m looking to do with some of the films I produce is have them be films that not only can I enjoy with my children, but prompt and promote a conversation with them that’s meaningful and not just mindless. That’s the thing about a film like this. I lost my mother two and one-half years ago and I watched my children have to navigate that. I think it’s good to have films that help families deal not just with the lighter side of life, but when some of the stuff is tricky. That’s what I love about E.T. Yes, it’s about an alien, but it’s also about an absent father and the fact this family is having to cope beyond that. Spielberg is one who does this so brilliantly, and I see less films that do that now. Pixar does it better than anyone. To be able to do that again with live action is something I’m really desirous to try and do. Oops, George is looking for me and they’re calling me to set. I’d better go.