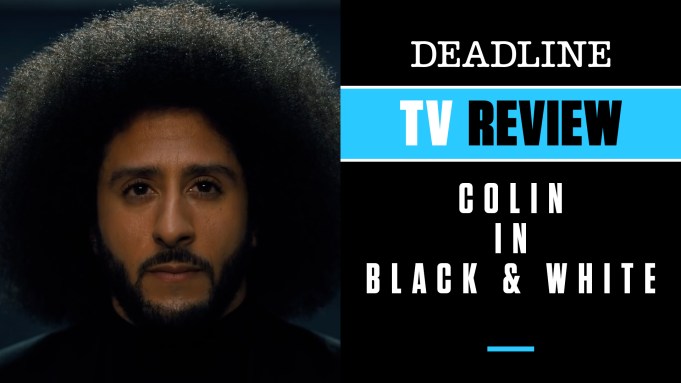 By the very nature of its co-creators and the tale they have to tell, Colin Kaepernick and Ava DuVernay’s Colin in Black & White was never going to be your standard coming-of-age drama.

In that vein, get in the game and check out my video review above of the Netflix limited series from the athlete/activist and the Oscar nominee.

Set to launch Friday on the streamer, the six-episode Colin in Black & White stars The Get Down vet Jaden Michael as the teenage version of the former San Francisco 49ers quarterback. Chasing his dreams of being a high school and college quarterback and hit hard by the institutional and cultural barriers that stand in his way, the biracial adoptive son of white parents (played by Mary-Louis Parker and Nick Offerman) develops a very real sense of what America wants to allow for him and where it wants to place him.

In many ways, in a tribute to the series, it seems almost inconceivable at this point that Kaepernick could have more drama in his life, off or on the field or screen.

Taking a seat and then a knee during the national anthem in protest of institutional racism and police brutality, Kap was kicked to the curb in 2017 by the NFL for his constitutionally guaranteed stance amid pressure from the likes of a lathered up Donald Trump. In the prime of his career, the man who helped take the 49ers to the Super Bowl in 2013 remains unsigned by a league that alternates using Kap as a poster boy or a pariah depending on the way political winds are blowing

Yet, in the Michael Starrbury-penned Colin in Black & White, the now iconic Kap speaks directly in the DuVernay-directed segments in his own voice, both looking at his own life and the world of today – unfiltered.

Aside from that, let me give you a hint: there is a lot of history in Colin in Black & White and not just on the field. Watch the review above to see what I mean.